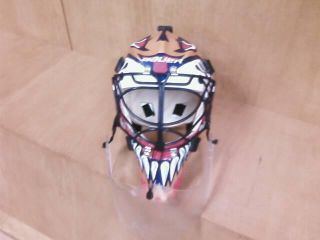 Scott Clemmensen finally has his new mask and it's a good thing since he's going to be in the starting lineup Friday against the deep-sea phishing Flyers.

Coach Pete DeBoer made it official today in announcing that Clemmensen would start against Philly at The Billboard come Friday. It'll be his first start of the season and first since leaving New Jersey for the Panthers over the summer.

DeBoer did not lay any blame at the feet of Tomas Vokoun. But this team is 1-4 and needs some kind of a shakeup. Plus, had Clemmensen not had to leave the team last week to deal with a family matter in Iowa, he probably would have already have been in there.

Quotes from DeBoer and Clemmensen later in the day.

-- DeBoer also shook up a few of the lines in practice today. Up on the second line: Rostislav Olesz. Down to the third line: Cory Stillman. Newbie Dominic Moore will open up centering the fourth line. The top line of Booth-Weiss-Horton remains unchanged.

-- Clemmensen's first Florida themed mask was too small for him and he plans on signing it and auctioning it for charity. It was a tropical-theme with puma-type cats all over the mask in pastel colors.

His new mask is anything but tropical.

Clemmensen changed things up and went with a more traditional Panther mask, one similar to the one used by John Vanbiesbrouck back in the day. Compare and contrast: 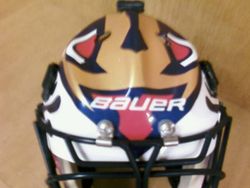 Clem is on the left, Beezer on the right. Obviously some differences, but some similarities as well.

I think it's a cool mask.

Clemmensen said he wanted to keep something similar to what he had in Jersey last year with the eyes on top and the big teeth on the front. 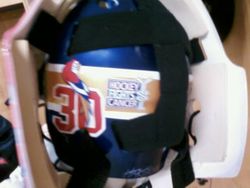 He also kept his Jimmy Buffet parrot on the back, with the bird wrapped inside his No. 30.

Clemmensen just got the mask and admitted it would have been strange had he been pressed into service Saturday night against the Devils wearing his old black-and-red New Jersey mask.

No such worries anymore.

-- Here is the only picture I have of Clemmensen's first mask. I should have taken some but didn't have my phone with me at the season preview photo shoot. He's on the right, Tomas Vokoun on the left. I will see if the helmet is around somewhere and get a better shot of the sides. 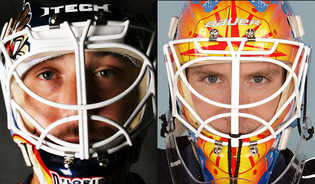