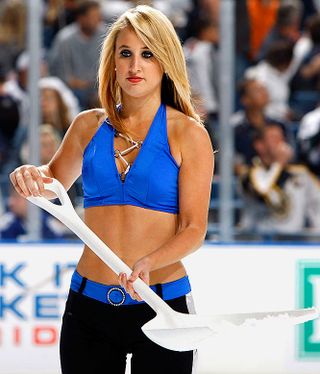 TAMPA -- The Panthers are desperate for a win and the Lightning are looking to win a second straight game tonight when the two Sunshine State rivals face off at St. Pete Times Forum.

The big story of the day is the future of defenseman Dmitry Kulikov. The 18-year-old will play his fifth game tonight, meaning he has four more to go before the Panthers have to make a big decision: Keep him for the season or send him back to his junior team.

Coach Pete DeBoer said today that if Kulikov keeps up what he's doing ''I don't know how we can send him anywhere.''

''He has to keep doing what he's been doing,'' DeBoer said. ''He's had one tough game. He's been pretty steady and is getting more and more confident. He needs to find a way to get his shot to the net, put pucks at the net, but that's going to come.

''You guys saw Stamko's development last year; this doesn't happen overnight. I think Hedman who is here is a little bit of a different story. He's hit the ground running. But it's tough for young defensemen. [Kulikov] is playing 18 minutes a night which is a great number for a young guy. He's contributing.

''If that continues, I don't know how we can send him anywhere.''

I later asked Pete if he was leaning one way or another as far as Kulikov goes and he gave me a smart aleck answer.

''I'm not leaning anyway right now, I'm standing straight up,'' he said. ''You know what? We're not going to make that decision until we have to and that's Game 9.''

-- Same lineup for tonight since Dominic Moore still isn't here. We may see him Friday against Philly. Or not.

-- And happy Columbus Day to all you Buckeye fans out there....

-- Just got official word from Sun Sports that tonight's game will be blacked out in South Florida even though people in South Florida get Sun Sports. It's apparently a league rule that Tampa Bay broadcasts can't be shown in South Florida, although I've watched a few of their games at my place and I don't have Center Ice.

Again, another dumb rule. I'm sure the Panthers have no problems with the game being on in South Florida even though it's a Tampa broadcast. And why are the Lightning blacked out in South Florida anyway? Has it hurt the Marlins ratings that the Rays are on in South Florida as well? No. Hockey needs all the help it can get in the Sunshine State. Let both teams roam the airways throughout the state. Might just get a few more fans in the process.

Anyway, the game is on Center Ice so if you have that, bully for you. If not, head to a place that has the package and it will be on. Quarterdeck in Sunrise is one, Incredible Ice and Carolina Ale House in Weston are others. I think the Miller's Ale House chains carry the package too. You might want to call first.

And you might want to get their early. Apparently there's some big football game tonight with the local team playing host to a bunch of jokers from New York.

-- Also, congrats to the University of Miami for staying atop the national hockey polls. Just got the release on it, although they called Miami the 'Redhawks.' Don't know what that's all about. Probably just a typo.

The University of Nebraska Omaha makes its 2009-10 debut in the poll at No. 15 this week after defeating Army and No. 13 University of Massachusetts Lowell.