New Jerseys in Florida? One Artist* Gives 'er a Shot 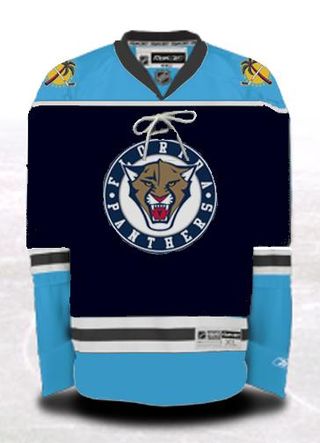 DETROIT -- So many of you have been asking to see what these new third jerseys look like, well, this is pretty close.

The team has done a good job of being secretive about these jerseys and this is what I would call an ''artists'' rendition*.

(*) My pal Alan did these up on his computer based on my description and he admits he's not an artist. I also had to change the main color and I'm definitely not an artist. But thanks Alan.

Anyway, as you can see, there's a lot of light blue in this jersey but also dark blue. Now the jersey I saw a photo of last week could be just a fake.

Others told me there is a light blue jersey (with dark blue shoulders) floating around.

But I like this dark blue and I like the striping of it. Kind of a traditional look. I'm not a fan of the piping on the new Reebok jerseys Florida wears and I'm glad that's not incorporated here.

The face on the jersey isn't the usual Panther head

(no whiskers, no triangles) but is a face they have used on the ice before. Someone told me this logo dates back to the Miami Arena days and it does look familiar.

Apparently it was one of the logo submissions back in 1992-93 that didn't make the cut but H. Wayne still liked. For good reason. It's cool.

Also, this version has the sun/palm tree/hockey stick on the sleeve. That is apparently gone and replaced with this. I'm sure the team is going to be trying to sell fans on this alternate logo by putting it on T-shirts and what not. It's OK. I would have liked to see a modernized sun/palm tree logo instead.

As you can perhaps see, there is some light and dark gray in there as well. Word on the street is this looks pretty good out on the ice and is expected to show up very well on television.

And I know many of you wanted red. But if this is indeed the jersey, do you like it? Would you buy it?

They will be on sale Monday at Pantherland apparently AFTER the game starts. I'm sure there will be a bunch of folks lined up there Monday night just to see these things after warmups.

Vote now with On Frozen Poll, will ya?