No Tony Tavares, so how 'bout John Tavares? ... David Booth Still Out for a While 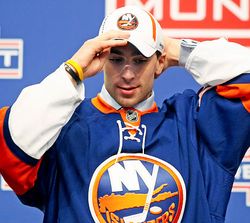 With the Panthers ownership situation finally settled in we can go back to the business of hockey.

Good matchup in Sunrise tonight as the Islanders come to town fresh off last night's overtime win in Raleigh.

Side note: How bad are things in Carolina right now? These guys were in the east finals last year and have now tied the franchise record for consecutive losses, a record set by those lovable Hartford Whalers.

Fourteen straight losses? How does that happen?

Anyway, John Tavares -- the top pick in what is known in these parts as the Dmitry Kulikov Draft -- and the Isles are in town. They didn't skate but did some off-ice stuff at The Billboard this morning.

-- Pete DeBoer says he has talked to David Booth about his joining the team for the upcoming Buffalo-Detroit-New York trip although Booth hasn't even started skating yet. I think Booth makes the trip and it's cool DeBoer made the offer. This will be the second time the Panthers have visited Booth's hometown with him on the roster and the second time Booth will miss the game against his hometown Wings because of injury.

At least he can have one of those world famous Buffalo Tofu Salads.

-- Not much else going on. Tomas Vokoun in net. Duh.