Could Reebok, Panthers Have Done More? 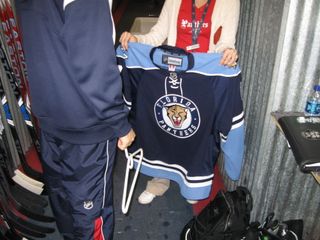 I know this is getting old, but people are still talking about these new jerseys (for instance, check out Puck Daddy's take here):

The Panthers and Reebok say these new third jerseys went through relentless research and tweaking, trying to find just the right look.

Look at the picture above (and the 09 jersey below).

That is the jersey we saw last year, the photo taken by David J. Neal at a Panthers practice in March.

It's exactly the same jersey they unveiled on Monday.

When I saw that jersey for the first time, I just assumed it was some kind of prototype.

First off, the color scheme threw me. Plus the logo looked a little fakeish (is that a word?). The FLORIDA PANTHERS in the circle looked very pedestrian. Is that Times Roman? Did they come up with this on Microsoft Word?

Then there was the goofy FLA. There had to be more, right? 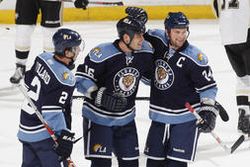 Nope. That is the identical jersey they rolled out on Monday. No changes. No tweaking. No changing of the fonts to make it look, you know, a little more professional.

Honest, the mockup we saw in March looked like a mockup.

But it was the final deal.

The colors seem to be the most shocking thing to people because it is such a difference from what the Panthers have had since Day 1. 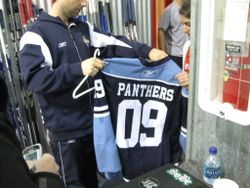 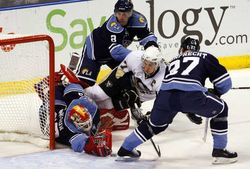 -- The font on the crest looks like it was done by the dry cleaner with a $100 Singer on the corner of 136th Avenue and Flamingo Road.

-- The Sun with the FLA really needs to go.

The jersey rolled out Monday was fine as a prototype, a jersey that needed some tweaks here and there. But there were no tweaks.

This is like a designer in Detroit coming up with a concept car and after the initial design, instead of working on it in the year before the roll out, the factory does nothing to make it better. Yet they keep it a big secret (telling everyone how much work went into it) then unveiled the same car they showed off at the auto show a year before.

But give the Panthers credit for this: They kept the jersey a true secret until the unveiling. I could have run these pictures a lot sooner, but there was no way I believed the photos I had would represent the final jersey.

So who gets the blame? The Panthers, sure. But a lot of that blame has to go on Reebok. They are the ones, I've been told, who did most of the designing. Of course, these are the same folks who thought it was cool to put 'AFC East' on all of the Dolphins (and Jets and Patriots, etc) sideline apparel.

Some Panthers jackets simply have Eastern (as in Conference, not the defunct airline) on the back. Like that means anything to anyone but them.

The Reebok people aren't real hip to what looks good. So it's not surprising that Reebok (it's not RBK anymore right? So why the FLA?) came up with this plain look. The jersey we saw in March looked fake, unfinished.

Yet that's what they rolled out. No wonder the Panthers kept it a secret and didn't have a big photo shoot beforehand. They wanted to bring it out and move on.

Again, the biggest thing people notice is the color of the jersey. Baby blue? people shouted. I said the same thing. That actually looks OK in my opinion.

The jersey, from far away, looks sharp. It's the little things that bother me. The Panthers had a real chance to do something cool here and didn't. 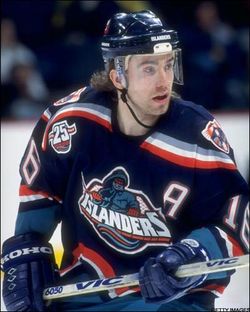 But hey, things could be worse.

At least it's not the Long Island Fisherman, a first-ballot inductee into the Bad Jerseys Hall of Fame.

This Panthers jersey isn't that bad. It won't be a classic and it's not horrible. But it could have been pretty cool had all the work we were told went into it actually went into it.

But like one Panther person told me: It looks better on television than it does in person.

At least they got that part right.

And here's a tip to the NHL: Let Nike back into the jersey game. Sure, they sometimes swing and miss (Oregon football, last week's FSU look) but at least they go down swinging.