So Sorry: Tomas Vokoun, Keith Ballard are Cool ... Three Up, Two Down 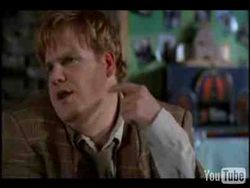 Sorry so late in getting this post up, but had quite a few errands to run. They are tough to run on the road, so I have to squeeze everything into today.

The big deal at practice was that Tomas Vokoun and Keith Ballard both spoke at length today, both showing a little humor in all the media gathered at practice. Heck, Channel 7 had a live truck going in the parking lot.

All for a team riding a five-game losing streak?

They were all there to talk to newcomers Mike Duco, Alexander Salak and Jeff Taffe. OK, they weren't. And Steve MacIntyre and Shawn Matthias weren't there either. They are on their way to Canada to join up with the Rochester Americans.

Now, onto Vokoun and Ballard.

"I feel fine, basically a cut on the ear. I didn't have a concussion, so we go day by day. Once I can put a helmet on without any pain in the ear I should be back. 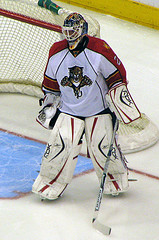 "At first I though ... I saw the play, saw him put the puck in the net and thought someone was backchecking. That's what I was thinking. I was trying to sweep the puck out of there. I thought when he went by me I got kicked in the head. Obviously I didn't see. I was looking to the other side. I was looking straight forward when I was hit.

"They told me in the hospital. I was curious to what happened. The impact didn't feel like a slash or being hit with a stick. It felt like being hit very hard by a knee or a foot. It would be hard for me to believe. It's not a big deal. The poor guy had some tough luck for a couple games and we all get frustrated. I'm not surprised he got mad. I saw it myself. He didn't know he hit me (laughing); he went to hit the post again and skated away like nothing happened.

"I played with Bally the last couple of years and I know the kind of person he is. I know how bad he feels. Lets just hope its quickly out of the highlights and the media so he doesn't have to hear about it more. And me too.

"I was surprised the stick could do so much damage. It looked worse [than it was]. NHL policy, when there is a hit to the head and a player is down; I told them I could get up and skate off. They didn't want me to move. It looks scary on TV. They had 10 people working on me and a stretcher and putting the neck brace on. It's for the one reason, and maybe some day someone is really hurt and it saves their life. It's worth it. It looked a lot scarier than it was.

"I have a nasty cut on my ear. That doesn't happen to goalies. Players get cut all the time. It was such a freak accident and the stretcher and going to the hospital. At first I was groggy; I could have gotten up and been stitched up at the rink. It was no big deal.

"I remember the whole thing. I was fine. I was just sick from seeing my own blood and that's just the way I am. I get sick when they draw my blood in the hospital. It looked worse than it was.

"He came to me as soon as I got on the plane. Everyone was laughing because my head was all wrapped up. I knew Bally, the game with Toronto there were a few plays. When you struggle, things aren't going your way. I just wanted to let him know things were fine, it wasn't his fault. We need him. He's one of our best defensemen. I have something at stake here too. I want him to feel good and know the guys are going to back him up no matter what.''

"It was terrible, something I never want to do again. I got caught up in the moment. Thankfully Tomas is OK. It could have been a lot worse. It's something everyone wants to put behind them. 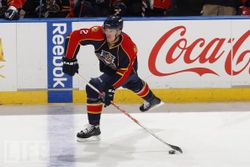 "When we found out he was OK, it was tough playing that night not knowing what was going on. He sat next to me on the plane and we talked for a while. He was more concerned about me. He was 'are you OK,' kind of laughing it off. He made it a lot easier on me. I had no idea what to say to him. It was stupid on my part and ended in a bad way.

"I had no idea. I saw it on tape and it looks awful. Sad thing is people see this, kids see this and think that this is how pros act. It's not something that I've ever done and will ever do again. I am terribly sorry. when it happened, I was so caught up in the moment that I didn't realize that I did hit him. I didn't know until I got to the bench and saw the trainers hop over. Then the guys told me. At that point, I was in shock.

"It wasn’t so much that they scored. It was just built-up frustration. We’ve lost five games in a row, I haven’t played well, everything just boiled over. I obviously did not handle it in a good way at all. They scored and I just snapped a little bit. It’s not acceptable.

"It’s been tough. I haven’t watched a lot of TV. Thankfully, I was pretty busy doing things around the house. But when you do something like this and you’re in the spotlight, that’s the consequences. We’re in the media every day, we’re on TV, and stuff like this gets on tape you have to expect that it’s going to be all over.

"I’ve gotten a lot of support from my teammates, my family, my friends, a lot of guys around the league have called and sent messages and e-mails. That part has been good. But it’s the people who don’t really know me --  that’s their only impression of me, and I guess that’s part of what I have to deal with.

"People have told me to keep my head up, it was an accident, it could have been them.

"I feel terrible about it, but I don't need people feeling sorry for me. It's something I did, something I brought on myself. Being in the public eye, you take the good with the bad.

"Vokie’s a good friend of mine to begin with. The way he handled it, that eased my mind the most. He said in two months, we’re going to laugh about this. He’s like, 'I’m fine, my head’s fine.' He’s got a cut on his ear. He said, 'Don’t worry about it just forget about it, it’s not a big deal.' So that’s been great.

"I didn’t really think of not playing. I had already let guys down enough. I made a dumb decision. And I think not playing would have left us shorthanded on the back end. Once I started playing, it was tough. I was more scared, I just didn’t know what happened. I mean, they carried him off on a stretcher. And the best case scenario is how it ended up. But I was thinking of the worst.

"I don’t think I’ve done it often. But I don’t remember the last time. But it’s probably not the first time, no.

"I didn’t know what to think. I didn’t know if he had a broken neck, a concussion, what it was. I feared the worst. I felt awful about it.

"The two situations, how they ended up, with Zednik, he was seriously injured. That was a complete freak accident. You can see how Olli felt terrible about it. This was stupidity on my part. That can be eliminated and that can be controlled. Something like that, a freak accident, I can see how they can scare you. This was me being stupid and letting my emotions get the best of me."