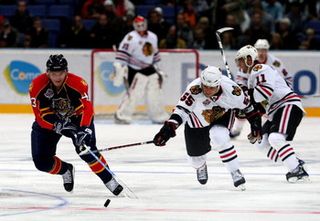 RALEIGH, N.C. -- Greetings from RBC Center in Raleigh, the useless banner capital of the United States. They really have a banner for just about every player, broadcaster and coach who ever played for N.C. State basketball, although I don't see anything honoring Celine Dion so I will cut them some slack.

Big news out of the Panthers is that rookie defenseman Dmitry Kulikov is probably out for at least a few weeks after injuring a knee Friday night against Carolina.

Coach Pete DeBoer said Kulikov had an MRI done today and the results aren't known yet.

"I think I would call it significant,'' DeBoer said, "but the initial guess is no surgery or anything like that."

Kulikov's injury is the first this season for a Florida defenseman.

"We've haven't been as fortunate up front,'' DeBoer said. "We have been fortunate on defense and we do have some depth in the organization. I think we're deeper on defense than any other position with Koistinen -- up til this point -- Ellerby and Garrison. We have guys down there who aren't first year players, they are experienced players we have available to us. You can never have enough defensemen.''

Ellerby could join the team later but couldn't do so today because of the terrific weather everyone is enjoying up here.