« Soup isn't On ... Ville Koistinen on Way Back? | Main | Off to Jersey, Wiseguy: Scott Clemmensen IN vs. New Jersey Brodeurs » 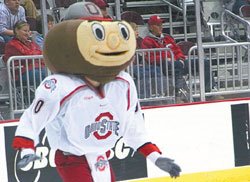 Gregory Campbell is out with concussion-like symptoms although general manager Randy Sexton says those symptoms have cleared up. Campbell was hurt when he hit the ice face-first after colliding with teammate Bryan Allen at the end of the second period.

Sexton says Campbell has to clear another test Thursday before he could be cleared to rejoining the team.

“We won’t get the results until Friday,’’ Sexton said. “I talked to [Campbell] today and he was feeling better. But he was still, you know; he still needs to finish all the tests. It’s related to his ability to process information. We’re just being careful, being cautious.’’

Campbell was replaced Wednesday by Shawn Matthias – the fourth player on the current roster who has logged significant time with Florida’s AHL affiliate in Rochester, N.Y.

The Panthers have four regulars on the shelf because of various injuries, with the team hopeful that winger Cory Stillman can return from a left knee injury in the coming weeks.

David Booth, who led the team in goals last season, has been out since being blindsided by Philadelphia’s Mike Richards on Oct. 24. Richards received no fine nor suspension for the hit, but Booth hasn’t yet begun skating.

The team says they hope Booth can return sometime after Christmas, but that timetable seems very optimistic.

“This is what you have a farm team for,’’ coach Pete DeBoer said before Wednesday’s game against the Blue Jackets. “In a perfect world, you hope your injuries are few and far between or at least spaced out so it’s more manageable.”

(*) Bad loss on Wednesday. The Blue Jackets were really hurting and ripe for picking. Only the Panthers failed to do much of anything offensively and have now lost nine of 10.

I know everyone points to the standings, but playoff teams usually don't go through streaks like these Panthers are. They started the season winning just two of 10; they have currently lost nine of 10.

Tonight was only the second shutout of the season however. Remember the first? That's right HelsinkiHeads, it came on Oct. 3 against the Blackhawks.

(*) Defenseman Ville Koistinen cleared re-entry waivers on Wednesday meaning he remains property of the Panthers as no other team wanted him despite basically getting him for half off.

Koistinen signed a two-year deal worth $2.4 million as a free agent on July 1. Had a team claimed him, the Panthers would have split the remainder of the money with that team.

Sexton said the Panthers would keep Koistinen in Rochester but could call him back if Florida has any more injuries.

“We have four games in six days here so we’ll see where we are after that,’’ he said. “If we don’t start to get healthy soon; Rochester is missing 10 guys. It’s getting to almost epidemic proportions.’’

(*) Columbus came into this season with high hopes after the team made it to the playoffs last spring for the first time in franchise history.

Things haven’t gone according to plan for the Jackets this season as they sit 11th in the Western Conference and like the Panthers, came into Wednesday’s game with losses in eight of nine games.

(*) The Panthers worked on their shootout skills at the end of Wednesday’s skate at Nationwide Arena, with DeBoer saying it was an “open tryout.” ‘

(*) Got word that a few of my friends lost their job last week when the Panthers downsized some more with four good people shown the door.

Just wanted you all to know I feel for you and make sure to call if I can do anything for you. Best of luck.