A New Den of Honor: Panthers to Honor Past, Present and Future Hockey in South Florida ... Jiggs McDonald to New York 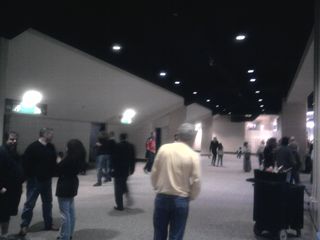 The Panthers had one of their most popular players from their past at BankAtlantic Center on Monday, the same night the team made its plans known for a new way to honor its past – and perhaps future.

Team president Michael Yormark said a new ‘Den of Honor’ would open later this season, replacing one that was taken down over the summer.

The new Den will be a virtual South Florida hockey Hall of Fame. About 70 percent of the 4,000 square feet structure (current state of site pictured) dedicated to the Panthers and the rest going to junior and high school hockey in the tri-county area.

Yormark said that folks from the Hockey Hall of Fame in Toronto have visited Sunrise and have consulted the Panthers on the new area. They have also worked with the team on what should go in (they went through the team's archives) and how to present it. Randy Moller also visited with the Hall staffon the last trip to Toronto.

John Vanbiesbrouck, the team’s original goalie, was at Monday’s game against the Thrashers and said the new plans would be welcomed by the team’s alumni. Yormark says the building will be dedicated on March 20 when the Sabres are in town.

A large number of former players are expected to attend the unveiling.

“It’s exciting,’’ said Vanbiesbrouck, whose jersey from the 1996 Stanley Cup Finals was one of two hanging in the old Den. “I think some of us past players, alumni, don’t have a lot to say about it. But it’s cool they are doing something equal or larger. This team will always hold a big place in my heart.’’

Yormark said the new Den would fill up space on the lower level that once was used as a mini-Hyundai showroom. Yormark said the franchise wants to reach out to its former players – and fans who have become disenfranchised with the team over the years.

“We want to use this as a tool to bring back alumni. This is also an opportunity to reconnect with former season ticket holders that walked away from the franchise. It’s going to be a major tribute the Florida Panthers brand, our former players and our community.’’

-- Moller will miss the Panthers upcoming two-game road trip to the New York area as he rests up after having a health scare after Saturday’s game in Sunrise. Hall of Fame broadcaster Jiggs McDonald is filling in for Moller – who is expected to return to the booth for Saturday’s home game against the Maple Leafs.