« Stephen Weiss Out; Shawn Matthias. Jeff Taffe Up | Main | A New Den of Honor: Panthers to Honor Past, Present and Future Hockey in South Florida ... Jiggs McDonald to New York » 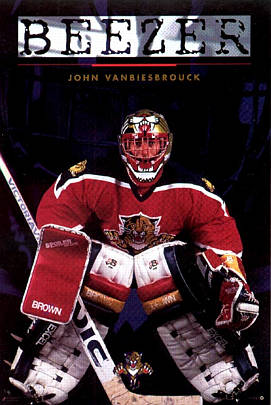 Former Panthers goalie John Vanbiesbrouck was in Orlando for some USA Hockey meetings, so the Michigan resident figured he'd head south to visit family -- and see the Panthers.

The Beezer is attending Monday's game against the Thrashers and will be signing autographs at Pantherland during the second intermission. So, if you have a Beezer mask or jersey you want signed, you gots plenty of time to get down to the arena.

And you will have no problem finding a seat. Trust me on this one. This isn't as bad a crowd as we saw in Atlanta back in November but it may be close. Hey, it's Monday and it's the Thrashers.

Anyway, talked to No. 34 before Monday's game on a variety of subjects.

Vanbiesbrouck says he would like to attend more Florida games, but living in Michigan obviously prohibits that. He says he still watches on television.

"I love it here and it's exciting to be here,'' he said. "The problem is I don't get around it that much. If I lived down here I would. I watch a lot on television and follow them quite a bit.''

Vanbiesbrouck, as you all know, has become close friends with David Booth over the years. Here's what he said about the injured Booth:

"It's all encouraging,'' he said. "He wouldn't tell me a timetable or that but he says he feels good. I'll go by that. He had a lot of idle time, and what do you do with that? He has so much energy, he's like a caged panther at this point. It's exciting to see he's having some breakthroughs.''

If you want to see what Vanbiesbrouck is working on these days, feel free to visit his website at www.vbksportsviewer.com

-- Here's what we got with the Stephen Weiss absence. Obviously some changes at center, but also on the second line. Radek Dvorak is up in place of Rostislav Olesz.