The Panthers Lose on the Island ... Nathan Horton Should be Fine 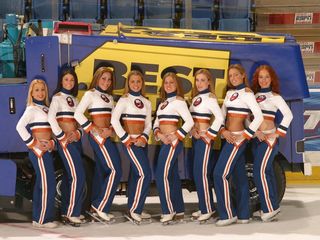 UNIONDALE, N.Y. -- It was somewhat of a surprise when Islanders coach Scott Gordon announced that his goalie on Thursday would be Dwayne Roloson considering his most recent past against the Panthers.

Gordon must have known something. That, or he has been watching the Panthers offense the past few games.

Florida's offense sputtered again Thursday, scoring just once as Roloson and the Islanders pulled out a 2-1 shootout victory at Nassau County Veterans Coliseum.

The Panthers have just two goals in their past three games and have now lost two straight despite terrific goaltending from Tomas Vokoun.

“We need to score goals in this league to win,'' said Stephen Weiss, who fed Nathan Horton for Florida's lone goal.

“It's just too tough of a league. One isn't going to cut it. With the way Vokoun is playing, we definitely should be getting points right now. It's on the forwards to get pucks to the net, find a way to get it done. Our goaltending is unbelievable. We should win easy every night if we just get a couple.''

Roloson was a much different goalie Thursday than he was back on Dec. 14, the night the Panthers lit him up for five goals and sent him to the bench early. This time around, Roloson stopped 33 shots in the first 65 minutes and stoned both Rostislav Olesz and Michael Frolik in the shootout. The Islanders scored on two of their first three in the shootout as Florida dropped to 5-7 in such endings.

The Panthers now trail the Islanders by three points in a very crowded playoff race.

“We had chances and they had chances,'' coach Pete DeBoer said. “It was a great game. Yes, it's tough not to win in overtime, but it's better than losing in regulation. You had two teams you could tell were looking at the standings. The level of play is different in the second half of the season.''

The Panthers had a scary moment late in the game when Horton was struck in the left leg by a Dennis Seidenberg shot. Horton hit the ice hard and as play continued around him, he crawled to the bench unable to stand up. Horton was eventually pulled into the bench area by athletic trainer David Zenobi.

Zenobi worked on Horton on the bench as the Florida winger grimaced in obvious pain but it appears he is fine. Horton was struck on the side of the left knee and isn't expected to have any structural damage. He walked into the dressing room from the training room with no crutches – just a limp, his knee wrapped in ice.

Horton's goal in the second gave the Panthers a 1-0 lead, but it wouldn't stand up as the Islanders tied it later in the period. After a scoreless third, one in which the Panthers went 0-for-2 on the power play, Florida squandered a terrific scoring chance in overtime as Blake Comeau (who tied the score) was called for a penalty 1:36 in.

Florida had a 4-on-3 advantage and watched a few shots get knocked away by Roloson. But the Panthers didn't generate as much as it should have in that situation -- especially considering that Jack Hillen was playing without a stick.

“We're not a high scoring team,'' Keith Ballard said. “We've got lots of goals, but it seems like we score one or two for a stretch and then we go periods where we score three to five. We have to find more consistency.''

Rookie defenseman Dmitry Kulikov was really starting to play well when the 19-year-old injured a knee in a game against Carolina on Dec. 18. On Thursday, he made his way back to the lineup.

“He's a young guy with good legs,'' DeBoer said. “If his timing is alright, I wouldn't be surprised to see him get right back to the 20 minute mark. We're definitely not going to limit his icetime. We hope he has good energy. I don't think that's an issue. It's his timing. This kid has passed every test we've given him.''

-- The start time for the Panthers home game against the Islanders on Jan. 31 has been moved up an hour to 4 p.m. because of the Pro Bowl being played in Miami Gardens.