« On Frozen Diamond: Baltimore Orioles Settle In to New Digs | Main | Wings and Pucks: Panthers Back on Ice, Team USA as Well »

Another Name for The Billboard ... Ratings for Team USA-Canada Strong ... Panthers Back on Wednesday 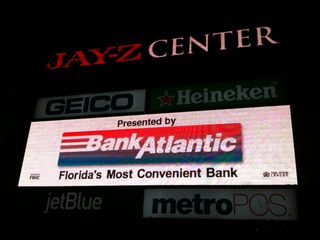 The Panthers send me plenty of e-mails regarding numerous things going on at their arena in Sunrise, but sometimes, they must just take my name off the list.

Like on Friday. So sorry this 'news' is a little late.

Sunrise Sports & Entertainment announced today that BankAtlantic renamed The BankAtlantic Center to The Jay-Z Center for 24 hours in support of the national kickoff of Jay-Z’s BP3 Tour on Saturday Feb. 20th.

The concert marks the opening of the famed artist’s 23-stop spring tour, which also includes concerts in New York, Chicago, and Los Angeles.

By all accounts it was a good show by Jay-Z -- and a great get for the Jay-Z Billboard Center.

Here is a link to Adrian Ruhi's review of the show, the set list and photos from the show.

Word is, the Panthers went all out to get this show over their rivals from Miami at AmericanAirlines Arena. I would not be surprised if this was thrown into the contract as a perk to help seal the deal.

Wonder what they are doing for this weekend's Jimmy Buffet show?

Nah, no one would ever go for that one.

-- Since construction began in 1996, the Sawgrass arena has been called, at one time or another:

Some names, of course, lasted longer than others.

-- The ratings for Sunday night's Team USA-Canada game were huge both in the States (despite being sent all the way over to MSNBC) and in Canada.

According to The Toronto Star, the "game became the most-watched sports broadcast in Canadian history, with an average of 10.6 million people sharing in the national angst."

Here in the States, the game was watched by more than 7 million people -- a little more than the Stanley Cup Finals averaged each night last season.

Panthers Tomas Vokoun and Dennis Seidenberg each have at least one more game in Vancouver. Vokoun backstops the Czechs tomorrow against Latvia and Seidenberg's German team's play comes to an end as they face Roberto Luongo and Canada.

-- The Panthers Olympic break is about over.

The team (minus Vokoun and Seidenberg and I'm sure one or two others) will be back at Incredible Ice in Coral Springs on Wednesday at 2 p.m. That practice, as well as the other ones leading up to the March 2 return in Atlanta, are also open. After Wednesday, the team is scheduled to go at 10 a.m.

Come see your favorite current Panthers while you can. They all might not be around all that long.