« Panthers Players, Coaches: We're Not Giving Up ... Management? 'No Small Change Will Fix' | Main | We Need a Break: Panthers Go Out with a Shootout Loss ... Bruins 3, Panthers 2 »

Panthers Stand Pat, Not What They Wanted to Do: Randy Sexton Talks 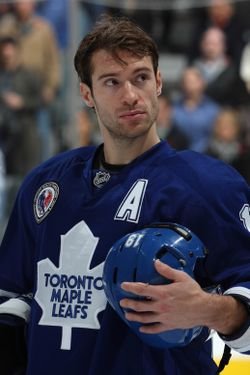 Just got off the phone with general manager Randy Sexton after the 3 p.m. Olympic trade deadline came and went.

The Panthers ended up making one move during this time, sending center Dominic Moore to the Canadiens for a second round pick in 2011 on Thursday. We thought there would be plenty more where that came from, but today was pretty quiet all around the league and in Sunrise as well.

Sexton says he got some things done and progress is being made toward the real trade deadline on March 3. That's when teams will be wheeling and dealing.

One thing you have to remember is that players get paid during the Olympic break even if there are no games being played. That makes some teams reluctant to make a major deal for one game (tops) and then watch that player collect a check for the next two weeks -- especially a player making a good chunk of change.

Here's what Randy had to say to the South Florida media:

"Today is the first deadline before the next deadline. There's a lot of time, I'll just keep working the next few weeks until the early part of March.

"Some teams still have games to play and we're all under the CBA roster limitations and salary cap floors and ceilings. For some teams, they're at the roster limit and playing tonight or tomorrow and it's a challenge to manage things. It's a point of negotiating. You want the lowest price if you are a buyer, and you want to extract the highest price if you are a seller.

HOW CLOSE DID YOU GET?

"Depends on one's definition of close. We didn't get anything completed, came up empty if you want to put it that way.

"I look at it positively. We have a lot of time left.

"We'll be both, and I mean if there's an opportunity where we get back players or prospects .-.-. The process is all about getting better. In some cases we may be selling, some may be buying.

"I don't think anyone is happy where we are.

"Deadlines cause people to focus. An [early] deadline causes some to focus. One GM told me today, and I thought he summed it up pretty well: Today's deadline doesn't have the panic threshold the other one will.

"Our guys get paid like there's no Olympic break at all. Some teams know they need to do something, and they'll use the last little while to figure that all out. Some teams don't want to take on the extra salary for the next two weeks.''