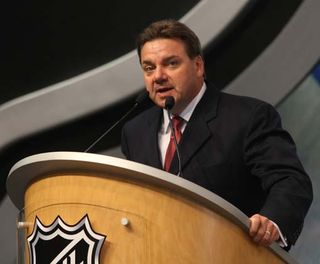 Randy Sexton just told us that he is hoping to get more deals done before the 3 p.m. mini deadline set tomorrow.

He said that no player -- including Tomas Vokoun -- is off limits in the trade talks. He has not spoken to anyone regarding waiving their no trade clauses.

A source close to Vokoun said the goalie would not waive his no trade at the current time despite the team's struggles on and off the ice. That could change post Olympics, however.

Sexton also said Rostislav Olesz is not on bench just to show people that he might be OK.

"This is the first move of the process to retool our team,'' Sexton said during the first intermission. "We need to make more moves, need to be better. We're working on a variety of things. .-.-. I think it speaks to the player Dominic is. He's a good serviceable guy.I told him when I called him that I thought he would fit in well with Jacques. He likes players with speed, guys who are smart. He has unique skills, good on face offs, good penalty killer. Those things are important to Jacques.

"From our perspective, we need to add depth. Converting a UFA guy we signed for nothing into a second round pick is something we need to do. There's going to be more things happening I hope.

"The time is ticking. We're working on a variety of things, the discussions have really picked up in the past 72 hours. We'll see. Deadlines cause people to focus.''

Randy also said the second round pick could be in play as part of a bigger deal. "Absolutely,'' he said.

-- "Whether we're buyers or sellers, we have to retool this team.''

Even Tomas Vokoun? "There's no player off limits. There are players we'd like to keep, but at the end of the day Wayne Gretzky was traded. We have to get better and get our team to the point where we want it to be. Sometimes you have to make hard decisions.''