« Randy Sexton: GM of the RMS Panthers ... Florida has 13 goals in 11 games; Ties a (bad) Franchise Record | Main | Louie's Back: Roberto Luongo's Return to Broward ... Olesz has Broken Finger ... No Roster Move Yet » 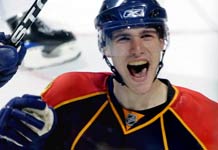 If last night's loss wasn't "brutal" enough, the Panthers also lost winger Rostislav Olesz in the final minute or so to a broken hand.

Coach Pete DeBoer said today that Olesz is getting X-Rays to see how serious it is, but he's out through the Olympic break at the very least.

As far as those trade rumors for Olesz, well, I'm not sure how true those were. Olesz has a big, long contract and for another team to take that on, the Panthers would likely have to take on someone else's problem in return.

Now, as far as other players go, I would think guys like Jordan Leopold, Dennis Seidenberg, Gregory Campbell and Kamil Kreps are in play. What they would bring, I don't know. I don't think the Panthers are going to do anything until the deadline because, what sense does it make? Play tomorrow's game against the Canucks and then make a deal?

They have four points to go get before the break and if they somehow get them, they are right back in the party. If they lose these next two and go into the break on a six game slide, Pantherland becomes Randy's Used Car Lot.