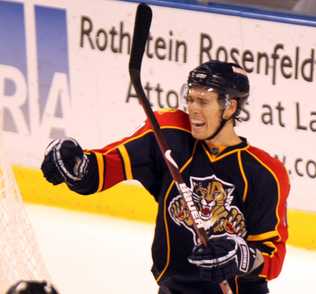 MONTREAL – The Panthers had another scary moment involving winger David Booth on Thursday as he was taken to a local hospital after being knocked out during the second period of Florida's 4-1 loss to the Canadiens.

Booth was hurt after being hit in the face by the elbow of Montreal defenseman Jaroslav Spacek less than two minutes into the second period.

After the game, Florida general manager Randy Sexton said Booth was alert and talking but couldn't give more details as he said Booth had more tests to take.

The Panthers were staying over in Montreal after the game and will travel to Ottawa on Friday morning via a chartered bus. Booth is expected to be on board.

“He's coherent, he's clear, he's alert,'' said Sexton, whose team's two game winning streak was snapped after the Canadiens jumped to a 2-0 lead and held on.

Booth missed 45 games this season after suffering a concussion in a hit delivered by Philadelphia's Mike Richards on Oct. 24.

That hit, and the ensuing coverage that followed it, helped pave the way for rule changes on the way the league doles out punishment for hits to the head. The league's union, coincidentally, agreed to the stiffer penalties hours before Thursday's game.

“What's he's been through, we're all concerned, thinking about him and crossing our fingers,'' said coach Pete DeBoer. “When he got hit, I just hoped it was the wind knocked out of him. When he stayed on his stomach, you get pretty concerned.''

Richards was assessed a game misconduct for his hit on Booth; Spacek was not penalized and watched Booth receive treatment as he stood on the ice a few feet away.

On Thursday, Booth was moving the puck along the boards near the Montreal blue line when the veteran Spacek rushed in and hit Booth square in the jaw with his elbow. Booth hit the ice, although he didn't fall face-first as he did following the Richards hit. DeBoer and a number of players said they felt the hit was clean.

Booth lay motionless on the ice for a few moments but started moving once athletic trainer Dave Zenobi reached him. After a minute or two, Booth rolled over, and sat up. He woozily stood up as Zenobi and a few teammates helped him into the tunnel leading into the Panthers locker room.

“We just hope he's OK and wish him nothing but the best,'' said backup goalie Scott Clemmensen, who was sitting in the tunnel a few yards away from Booth and helped him into the tunnel. “It's tough to see, I don't care who it is, but you don't like seeing a friend of yours laying on the ice. And for him, especially after what he's already been through.''

Florida trailed 2-0 at the point of the Booth hit as the host Canadiens continued working toward a playoff berth as they scored twice in the opening period. Tomas Vokoun, starting in net for the first time since last Saturday, gave up a backhander to Benoit Pouliot off a Florida turnover with 7:20 left in the first.

Montreal got its second goal less than four minutes later when Brian Gionata scored from the right circle. Florida battled back as Radek Dvorak scored with 3:36 left. But the Canadiens took advantage of the empty net, potting a pair of goals in the final 1:24 to end it. The Canadiens took three of four from the Panthers for the second consecutive season.

The Panthers remained seven points out of the final playoff spot with nine games remaining.

LIVING ON THE EDGE

Ever since the Panthers traded a pair of their veteran defensemen earlier this month, DeBoer has been using a short line of defensemen.

Captain Bryan McCabe and Keith Ballard get the bulk of the work as does Bryan Allen – despite his surgically repaired knee that cost him all but two games last season. Rookies Dmitry Kulikov and Jason Garrison are getting good experience, although 21-year-old Keaton Ellerby is barely playing at all.

And DeBoer knows this situation is less than ideal.

“As a coach, it's an accident waiting to happen,'' he said Thursday morning. “We are asking too much of them. They're handling it, but it's not a great situation.''

DeBoer admits he didn't know what to expect from Allen coming into the season, but the 29-year blueliner has been “real gutsy.'' Allen played in his 15th consecutive game Thursday and 67th overall.

-- Former Panthers forward Dominic Moore fit right in with the Canadiens, scoring two goals in his first five games after being traded to Montreal for a 2011 second round pick in February.