David Booth Knocked Out vs. Canadiens: Alert, Coherent and Going to Hospital 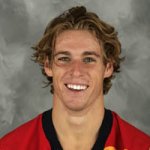 MONTREAL – The Panthers had another scary moment involving winger David Booth on Thursday as he hit the ice after taking a hard hit from Canadiens' defenseman Jaroslav Spacek during the second period of their game against the Canadiens at Bell Center.,

Booth was helped off the ice and taken from the arena to a local hospital.

According to team spokesman Justin Copertino, Booth was attended to by Dr. David Mulder of the Montreal Canadiens medical team. Mulder said Booth was alert, attentive and moving around. Booth is expected to travel with the team via bus to Ottawa on Friday morning.

Booth missed 45 games this season after suffering a concussion in a hit delivered by Philadelphia's Mike Richards on Oct. 24.

That hit, and the ensuing coverage that followed it, helped pave the way for rule changes on the way the league doles out punishment for hits to the head. The league's union, coincidentally, agreed to the stiffer penalties hours before Thursday's game.

Richards was assessed a game misconduct for his hit on Booth; Spacek was not penalized and watched Booth receive treatment as he stood on the ice a few feet away.

On Thursday, Booth was moving the puck along the boards near the Montreal blue line when the veteran Spacek rushed in and hit Booth square in the face with his elbow. Booth hit the ice, although he didn't fall face-first as he did following the Richards hit.

Booth lay motionless on the ice for a few moments but started moving once athletic trainer Dave Zenobi reached him. After a minute or two, Booth rolled over, and sat up. He woozily stood up as Zenobi and a few teammates helped him into the tunnel leading into the Panthers locker room.

Florida trailed 2-0 at the point of the Booth hit as the host Canadiens continued working toward a playoff berth as they scored twice in the opening period. Tomas Vokoun, starting in net for the first time since last Saturday, gave up a backhander to Benoit Pouliot off a Florida turnover with 7:20 left in the first.

Montreal got its second goal less than four minutes later when Brian Gionata scored from the right circle.