David Booth: Season Over? Probably So 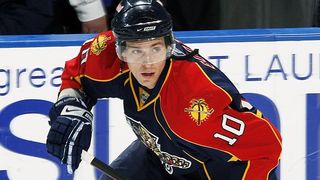 OTTAWA – David Booth missed 45 games after suffering his first concussion of his life on Oct. 24.

After getting his second on Thursday night in Montreal, it appears the Panthers star winger is done for the season.

Booth was released from a Montreal hospital early Friday morning and was later put on a plane bound for Miami International Airport. Booth is expected to examined by team medical personnel in South Florida and it will be determined whether or not he can be cleared to play again this season.

Yet with the Panthers playoff hopes all but dead and only nine games remaining, coach Pete DeBoer stressed that the organization needs to look at the big picture when it comes to Booth. Last year's leading goal scorer, Booth signed a six-year deal in the offseason and is the team's highest paid forward.

Booth had eight goals in 28 games this season – including four in the past five games.

“I'm not going to say Booth is done for the season, but he very well might be and there's a strong probability of that,'' DeBoer said after his team's workout in Ottawa on Friday.

“But the next step is to get him to Florida, get evaluated and we'll know more. I'm very concerned about it. Where we are in the standings, you have to weigh whether the risk makes sense. But the doctors will make that decision for us.''

When Booth suffered his first concussion in Philadelphia, Flyers captain Mike Richards was roundly criticized for his open ice hit that knocked Booth unconscious. On Thursday, Booth was working the puck into the Montreal zone when defenseman Jaroslav Spacek collided with Booth, hitting him flush in the face.

Booth was looking down at the ice and didn't appear to see Spacek coming. Spacek was not penalized on the play and seemed concerned for Booth's well being as he stood nearby on the ice as medical staff attended to him. Spacek's hit was called clean by just about every Panthers player and coach asked for an opinion on it.

“You can't just tell him to keep his head up because of the way he plays,'' said DeBoer. “He's aggressive and goes after the puck. The play [Thursday] was him making the extra effort and reaching for it. And a guy was there. That's the way he plays and unfortunately he's gotten a couple concussions because of it.''

Booth had just been coming out of his funk from the first concussion when he was hit with the second. He returned to the Panthers seven games before the February Olympic break, scoring no goals with two assists. The long rest between games seemed to be very beneficial to Booth as he scored two goals with four assists in his first two games back from the break.

DeBoer says he's going to mix up the lines before Saturday's game against the Senators and didn't say who would replace Booth on the second forward line. Bruiser Steve MacIntyre was recalled from the team's AHL affiliate in Rochester, N.Y., but he's expected to play on the fourth line. Michael Frolik could slide up into Booth's spot.

“I think the team was deflated,'' center Stephen Weiss said regarding Thursday's hit. “You never want to see a guy get hurt like that, and after what happened earlier, that was pretty ugly. At least now he has the summer to rest and get better. Hopefully nothing is wrong. We're all thinking about him.''

The game: The two have split the two games this season, with the road team winning each time. After losing five straight, the Senators beat Montreal and Philadelphia earlier this week before visiting Buffalo on Friday night. Florida had its modest two game winning streak snapped with a 4-1 loss in Montreal on Thursday. The Canadiens scored two empty net goals in the final 90 seconds.