« Panthers Take It To Go In T.O.: Florida 4, Maple Leafs 1 | Main | David Booth Knocked Out vs. Canadiens: Alert, Coherent and Going to Hospital » 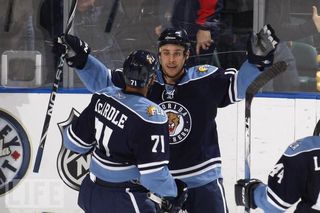 MONTREAL – This isn't how Gregory Campbell wanted his contract year to go.

“This has been pretty frustrating for me,'' Campbell said Wednesday. “It's been one thing after another. But it's part of the game.''

Now, Campbell's season may be over. Coach Pete DeBoer confirmed on Wednesday that Campbell fractured a bone in his foot blocking a shot last Saturday night. Both DeBoer and Campbell say he could return in the coming weeks, but with the season winding down, it's possible he could be done.

“We'll see how it develops,'' DeBoer said after Wednesday's practice at the Canadiens new suburban training facility. “I don't anticipate him being able to get his [skate] on for a few days but it's definitely not weeks. He doesn't need a cast but it is fractured.''

Campbell played after taking a shot off his skate but once he took off his boot, the foot swelled and he's been unable to put it back on. Campbell said he'll be back before the season ends – the Panthers have 10 games left – but doesn't know when. It could take six weeks for the bone to heal, although Campbell could play through the pain if the swelling subsides.

“It's a broken bone, but once I can put on the skate and push off and feel confident on my stop and starts, then I can come back,'' Campbell said. “If I can get the foot back in the skate, I'll try it. I'm hoping for the best. If it hurts a little, that's fine. But I want to be able to skate the right way. I don't want to be a liability.''

The Panthers will likely tender Campbell a contract after this season as he is a popular player within the locker room and is well liked by the coaching staff. Campbell, the son of NHL executive Colin Campbell, has grown up within the Panthers organization as team picked him in the third round of the 2003 draft. He made his NHL debut a few months later when the Panthers played the New York Islanders.

Florida signed Campbell to a two-year deal worth $1.5 million in 2008.

“I'm coming off a pretty good last year and I have worked hard,'' said Campbell, who has played in 363 career games with the Panthers. “Am I satisfied? No. I always want to be better, help the team in any way. And that means offensively. I try not to focus on the contract stuff. Those things kind of take care of themselves. I put the team first. I believe in this team, believe in the message here and I want to be a part of it. I want to help this team get to the playoffs. The contract is secondary.''

Tomas Vokoun will back in net for the Panthers after Scott Clemmensen backstopped the Panthers to a pair of wins against the Lightning and Maple Leafs. DeBoer says the mental rest, if nothing else, will be good for Vokoun. Not only has he played in 59 games for the Panthers this season-- matching last year's total -- but also was the starting goalie for the Czech Republic in the Vancouver games.

“Look at where we are and how much I have played, I haven't been able to practice much in the past three months,'' said Vokoun. “It's been a nice break. Yes, you want to play. But you have to rest too. You need to have that hunger for the game. It was a nice couple of days.''

Added DeBoer: “It's really the first bump in the road of his season except for our start and I don't think that was his fault. I thought he was pretty sharp. It's a minor bump. With what we've asked him to do and the Olympics and the pressures of being in a one goal game every night, we gave Clemmensen the extra night. We hope Vokoun comes back refreshed.''

The game: The Panthers have won two straight games but haven't won a game in Montreal since Dec. 18, 2007. The Canadiens had lost two straight going into Wednesday's game in Buffalo. Before losing in overtime to the Leafs on Saturday, the Canadiens had won six straight to help solidify a playoff spot in their first season under coach Jacques Martin. Montreal has won two of three against Florida this season and seven of the past 11.