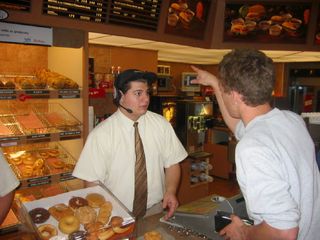 TORONTO – Panthers general manager Randy Sexton said a few weeks ago that had David Booth not been knocked out in October and missed 45 games because of that concussion, his team would be in the playoff mix.

With the way Booth has been playing the past few weeks, Sexton may have a very valid argument.

The Panthers winger scored twice Tuesday giving him four goals in four games as Florida won its second straight game with a 4-1 victory over the Maple Leafs at Air Canada Center.

Booth, who scored a team-high 31 goals last season, has eight goals in 27 games this season.

“You can't really look back and ask 'what could have been','' said Booth. “We have a good enough team here that when anyone steps into the lineup, we have a chance. Those things happen. It's tough, but every team has injuries.''

The Panthers season is rapidly coming to a close and with 10 games remaining, their shot at the last playoff spot is remote indeed. But with Booth and Nathan Horton – who missed 17 games with a broken leg – back in the lineup, the Panthers offense has shown signs of life after weeks of hibernation.

“Obviously, having Booth and Horton back, we're a different team,'' said coach Pete DeBoer. “Someone threw the stat out that since the [Olympic] break, we're seventh in the league in goals scored. That's a whole lot different than the 12 games going in when we were dead last. Those guys are world class players and they change the face of your team when they are in the lineup.''

Florida may have only scored three goals against Leafs backup Jean-Sebastien Giguere (Jason Garrison's came into an empty net) on Tuesday, but had their chances.

The Leafs came into the night winners of three straight and seven of nine, and made goalie Scott Clemmensen work hard throughout.

Clemmensen, making his second straight start after beating the Lightning Sunday in Sunrise, was as sharp as he has been all season and definitely showed he deserves more playing time as the season concludes. Clemmensen was peppered with shots, stopping 42 of 43 to earn his second straight win and seventh of the season.

Before the game, DeBoer said starter Tomas Vokoun would get the start Thursday in Montreal regardless of what happened Tuesday. DeBoer says he's sticking with that plan.

“I had to get into the rhythm of the game,'' said Clemmensen, who has stopped 103 of 109 shots in four games of action in the past week. “I felt pretty confidence all game because I was able to get some saves early on.''

Tuesday, the Leafs looked to a take the first lead when leading scorer Phil Kessel came down on a breakaway but couldn't connect. Instead it was Florida taking the 1-0 first period lead when David Booth picked Luke Schenn's pocket and scored on a breakaway of his own. DeBoer says he wasn't happy with Florida's play in the first, one in which Clemmensen was forced to make 19 saves.

In the third, Booth gave Florida some breathing room when he redirected a shot from former Toronto assistant captain Bryan McCabe at 1:25 of the period. Michael Frolik all but put the game away with 8:22 left when he ripped off a shot from the left circle that beat Giguere.

Clemmensen was also very good in the third period as he helped the Panthers kill off three penalties. Horton went to the bin twice with Nick Tarnasky following suit. Toronto went 0-for-6 on the power play.

The Panthers and Leafs ended up splitting the season series.

-- Center Gregory Campbell missed his second straight game with a foot/ankle injury suffered Saturday against the Sabres. DeBoer said Sunday that Campbell was scheduled to have a second X-ray but admitted Tuesday he wasn't sure if that had happened or not.

-- Tuesday's game was a meeting between two of the youngest teams in the league. Toronto leads the NHL with an average age of 26.7 years old. The Panthers are fifth at 27.4. Of the top five, only one team – Chicago (27.4) – is in the playoff mix.

-- Rostislav Olesz ended his 21 game scoreless streak by getting the second assist on Booth's second goal. Olesz hadn't recorded an assist since Jan. 18 against Atlanta. Olesz hasn't scored a goal since getting two Jan. 16 against the Lightning.