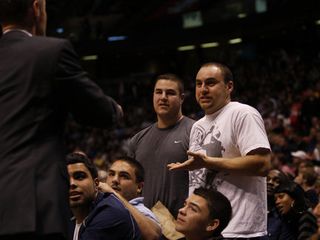 TORONTO -- I know some of you out there have contemplated going to Sunrise wearing a paper bag on your head to show your displeasure with the Florida Panthers season.

Some New Jersey Nets fans have done so and faced the wrath of Yormark.

At last night's Nets-Heat game in the Meadowlands, Brett Yormark (CEO of the Brooklyn Nets) got into it with some fans -- one of whom was wearing a paper bag over his head.

In case you don't follow the NBA, the Nets aren't good. They are a lot worse than the Panthers. Possibly record-breaking bad.

Apparently these guys sit by the bench and by B.Yormark and he didn't like what he saw. If these guys were season ticket holders, I'm sure they've seen a lot of basketball they didn't like seeing. Again, the Nets are brutal.

According to the Newark Star-Ledger, B.Yormark issued a statement on what happened on Monday night. Hey, I like that the guy's sticking up for his team -- and the paper bag thing has been done to death.

But there is nothing wrong with a paying customer wearing a paper bag (I would avoid the plastic ones) to a game if they wanted to demonstrate their unhappiness with the team.

Unless they got the tickets for free at Quarterdeck. Then you have to wear the Quarterdeck to-go bag. It's only right.

“Our fans have been great and they’ve stuck with us through a tough season,'' B.Yormark says in the statement.

"I did not agree with the way this person expressed his opinion of our team last night and I let him know. It’s been a frustrating season for all of us, but I will continue to stand up for our players, our fans, and our organization. We have an exciting future ahead and we appreciate all of our fans’ support.”