« Keith Ballard: "I'm Getting Pretty Good at YouTube" | Main | Devils Go Down In Florida: Unable to Find a Goal to Steal ... Clemmensen Puts Jersey In a Bind ... Cheverie Signs »

Bryan Allen Fights to Play ... McArdle to Have Surgery No. 2 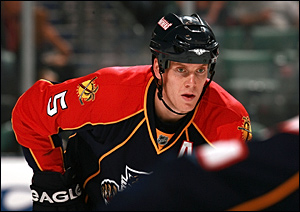 Bryan Allen had the seventh surgery on his left knee last season, a major procedure called microfracture surgery. Allen missed all but two games because of the surgery and didn't start skating on it until the summer.

Coach Pete DeBoer understandably didn't exactly know what Allen was going to be able to do on the ice this season.

“What surprised me is his personal resiliency and toughness to play through,'' said DeBoer. “I'll be honest, it's still worrisome and there's still a lot of stuff going on. But this guy won't take no for an answer and wants to play badly and help the team badly. He's sacrificing his body to do that.''

On Wednesday, Allen was named the Panthers nominee for the annual Bill Masterton Trophy. The award is given to the NHL player who “best exemplifies the qualities of perseverance, sportsmanship, and dedication to hockey.” It is awarded by the Professional Hockey Writers Association and Allen was nominated by the Florida chapter.

Allen hasn't rebounded all the way from his most recent surgery as he and the team have had to monitor it throughout the season. Yet before he had to miss two games with a rib injury, Allen played in 71 of Florida's first 77 games. Allen is expected to return to the lineup Thursday against the Devils.

“I feel good, better than expected,'' said Allen. “If there's a chance you should be playing, you should. I don't want to end this year on an injury, especially how last year went. Last year was one of my hardest year's ever and moving forward, it's something I have to take care of.''

One of the team leaders, fellow defenseman Keith Ballard says Allen is a professional in every sense of the word. Allen has been known to make new players feel welcome and is pretty good at picking out restaurants on the road.

And those who see how hard Allen works to be able to stay on the ice know how much he loves the game.

“Everyone sees him on the ice, playing a physical game, blocking shots, sticking up for teammates, playing great defense,'' said Ballard. “People don't see him warming up for an hour before a game to get his knee ready, staying after practice for treatments on it every day. I room with him on the road, and several times a day at the hotel, he gets treatment.'' 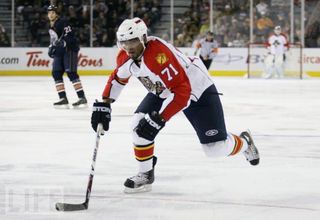 -- Kenndal McArdle was expected to have surgery on his right shoulder in Fort Lauderdale on Wednesday.

McArdle, who played in 19 games for the Panthers this season, was lost for the season when he injured his left shoulder in the minors. McArdle had surgery on that shoulder six weeks ago. He says he should be healthy and ready to go by training camp.

The game: The Devils moved to two points ahead of Pittsburgh in the Atlantic Division race after blanking Atlanta 3-0 on Tuesday. Martin Brodeur notched his second straight shutout and league-leading ninth of the season after stopping just 19 shots. The Panthers will counter with Tomas Vokoun who has lost seven straight starts. The Panthers have scored two goals or less in seven straight games as the team has lost nine of 12.