« Florida Panthers: Lets Wrap It Up ... Season Finale TODAY | Main | And Then it was Done: The Panthers Highlights and Lowlights from 2009-10 » 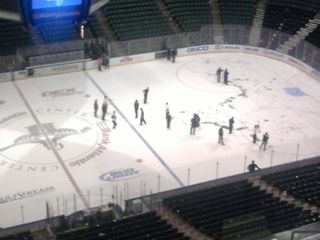 Stephen Weiss has seen many final games come and go.

He never participated in one in which his team finished in last place in the Southeast Division.

He never partook in one in which confetti fell from the rafters of the Sunrise arena as the players were on the ice "celebrating" the end of what was a most disappointing season.

“Maybe that's a word I'll use off the air,'' Weiss said, his eyes fixed on the wall across the room.

“I don't know what to say. It got under my skin to see that. I've seen a lot here. I don't know where these things come from, who makes these decisions. It's certainly not the right way to do things. The jersey off your back is fine, that's good for the fans. But confetti and streamers?”

Usually losing the final two games of your season isn't a cause for celebration, but when it comes to the Panthers, any silver lining will do.

Florida's 3-1 loss to Tampa Bay on Sunday ensured the team will have a top draft pick this summer, good news for a team that could use an infusion of talent.

Of course this wasn't the season the Panthers hoped for when the season opened with a rousing shootout win against the powerhouse Blackhawks in Helsinki, Finland. No one then could have guessed the Panthers would finish in last place in their division – the first time a Florida team had done so in its history.

The Panthers may not have hit rock bottom – the tradition rich Edmonton Oilers and Toronto Maple Leafs finished behind the Panthers. But if you are going to miss the playoffs anyway, you might as well nosedive like the Panthers.

Sometimes you need to be really bad to get better.

The Panthers, realistically out of the playoff race since the Olympic break in February, lost 12 of their final 20 games and scored three goals or fewer in its final 10 games.

“Obviously it's nothing to be proud of,'' said goalie Scott Clemmensen, who stopped 28 of 30 shots in Sunday's loss. “I don't think it was for lack of effort, but for whatever reason, we finished up short. There's room for improvement.''

At third, the Panthers have a decent chance to jump up to No. 1. And Florida has history on its side as the franchise did win the lottery from the third slot twice before. Of course, the Panthers traded the pick away.

Believe it or not, but the players knew Sunday's third period was a no win situation. Florida came into the third down 2-1 and to win the game meant hurting the franchise in the long run.

“That's difficult because you want to play in meaningful games,'' said Weiss, who led the team in scoring this season but didn't score in the third despite a few chances.

“For me, I've played in a lot of these kind of games. And I've never seen confetti rain down on a team that finished in last place. Those are things that get under your skin a little bit. We need to change that next year, make sure we're inside the playoffs. It gets frustrating.''

The Panthers took a 1-0 lead in the game when Rostislav Olesz scored his first goal since getting two in Tampa Bay on Jan. 16. Olesz has struggled the past few months of the season, getting just three points off a goal and two assists in his final 30 games of the season. The Panthers expected much more out of Olesz this season as he did himself. Statistically, however, Olesz matched his career high with 14 goals.

“We lost and we wanted to win the game in front of our fans so it was disappointing,'' Olesz said after the game. “I'm not glad it's over, although it's been a challenge for me. I didn't play bad. I had a lot of scoring chances. I just couldn't score, couldn't put it it.''

The Lightning came back, with Alex Tanguay – who was hotly pursued by the Panthers during the offseason – scoring six minutes after Olesz did.

Just over two minutes later, Vinny Lecavalier scored to make it 2-1. And that's where the game stood until Steven Stamkos got his 51st goal of the season on an empty net Dmitry Kulikov and Weiss tried to save with 13 seconds left.

So maybe the confetti that fell onto the ice during the postgame ceremony was for Stamkos? His goal tied him for the league lead with Sidney Crosby and earned him a share of the Rocket Richard Trophy.

“It was just a disappointing year,'' said coach Pete DeBoer. “It's the toughest month – from the trade deadline – of my coaching career. But like I told the players: We made our bed, we have to lay in it. Just hope we never have to go through this again.''

"I wouldn't have been playing like that under different circumstances,'' said Stamkos, who raced up ice with the puck after the Lightning won the faceoff. “This team just supported me so much and was looking for me. I appreciate that. They were trying to pass to me the whole game. I think it just shows the circumstances and shows the class guys we have on our team and the coaching staff."

-- Bryan McCabe was named the team's defensive player of the year. McCabe, the Panthers captain, was trying to win Sunday's game as he fired off a shot late that Mike Smith had trouble with. McCabe ended with eight goals and 35 assists.

-- Goalie Tomas Vokoun was named the team's star of the season after going 23-28-11. He missed the final three games of the season with a back strain suffered in last week's loss to Ottawa.

“It's sore but it's nothing really bad or anything,'' Vokoun said. “I've been through it here for the last while and we've had some tough times. You'd like to finish it off and be done with it. But it made no sense trying to push it.''

-- Weiss was named the team's MVP as voted on by fans.