« Flyers Make Historic Comeback: Riot Punch, Anyone? ... Now! With On Frozen Poll | Main | Panthers Carousel of Progress? Not So Far » 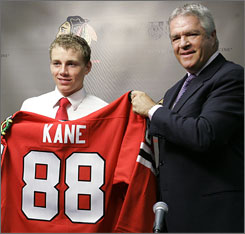 The Florida Panthers have changed general managers for the third time in a year as Dale Tallon has been hired to replace Randy Sexton.

Tallon, the former general manager of the Chicago Blackhawks, will be introduced at a press conference at the team's arena in Sunrise on Tuesday at 11 a.m.

Tallon is the ninth general manager in franchise history and seventh since the start of the 2000-01 season.

“It is with great pleasure and excitement that I join the Florida Panthers,” Tallon said in a release. “I look forward to getting to work and will immediately evaluate our club’s framework, as we diligently prepare for the upcoming draft and free agency signing period.”

Tallon was demoted by the Blackhawks last summer a week after the team mistakingly didn't offer qualifying offers to their restricted free agents by the deadline. Tallon had one year left on his contract with the team. Sexton, who was in Brandon, Manitoba, scouting the Canadian Memorial Cup when told of Tallon's hiring, was not available for comment and it's not known what – if any – role he will play in the organization. Tallon is expected to address that on Tuesday.

Tallon took over as Chicago's general manager in 2005. At the time, the Blackhawks had missed the playoffs in seven of eight years. Since Tallon was hired in Chicago, the Blackhawks advanced to the conference finals twice. Chicago lost to Detroit in the 2009 west finals.

The Panthers haven't been to the playoffs in an NHL record-tying nine seasons and record-setting 10 years. Sexton was Florida's assistant general manager under Jacques Martin from 2007-09 and was the team's interim general manager through last summer after Martin left June 1 to become coach of the Montreal Canadiens – who opened the Eastern Conference finals Sunday night in Philadelphia.

Sexton was given the permanent GM job just hours before Florida opened the 2009-10 season on Oct. 2 in Helsinki, Finland. Sexton's press conference in Helsinki was held prior to the Panthers taking on the Blackhawks.

It is not clear what changes Tallon would institute when he takes over the Panthers – and Sexton could remain with the franchise in some capacity although the contract he signed with the team last year is expiring.

Coach Pete DeBoer is signed for at least another year and is expected to return. The Panthers had not commented on DeBoer's status publicly since the offseason started, the thought being they would wait until a new GM was in place. Florida's two bench assistant coaches – Mike Kitchen and Jim Hulton – have expiring contracts.

Tallon brings a wealth of hockey experience to Sunrise. Not only is Tallon an experienced manager, but he was also an accomplished player. In 1970, he was the second overall pick in the draft by the Vancouver Canucks. Tallon spent 10 seasons in the NHL, the two-time All-Star defenseman's career derailed by injuries. Tallon, who also played for the Blackhawks and Penguins, ended his career with 98 goals and 238 assists in 642 games.

After spending time in the broadcasting booth, Tallon was hired by Chicago to be their director of player personnel in 1998 and promoted to assistant GM in 2003. Tallon was named the team's full-time GM in 2005 and he remained there until he was replaced by Stan Bowman a week after the team missed the deadline for sending qualifying offers to restricted free agents.

Tallon's work in rebuilding the Blackhawks has not gone unnoticed. According to Pierre LeBrun of ESPN.com, Tallon received a vote in the recent balloting for the league's GM of the year award – even though he's no longer the team's manager. Washington's George McPhee, Nashville's David Poile and Phoenix's Don Maloney ended up being the three finalists for the award.

South Florida golf courses should also expect to see Tallon teeing it up during his free time. Tallon won the 1969 Canadian Junior championship and spent a few offseasons competing on the Canadian PGA Tour.