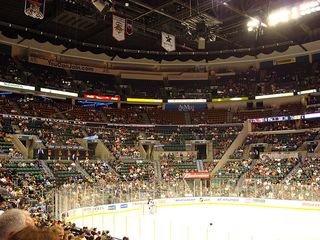 The Florida Panthers spent their early years playing at the Miami Arena. At the time, it was one of the smallest and most intimate venues in the NHL.

Those were great days for the Panthers. Not only was the team winning, but there was a demand for the product. Those who wanted to buy season tickets got on a list. Single game tickets were scarce.

In 1998, the team moved to its sprawling new home on the edge of the Everglades. Seating capacity went from 14,823 in Miami to 19,250 in suburban Sunrise.

“Our building is just too big,'' team president Michael Yormark said Wednesday. “It would be too big for a lot of teams in the league.''

With the team failing to make the playoffs in the past decade, on most nights, a large number of seats sit empty during home games.

Now, they'll just be covered up.

The Panthers are expected to announce on Thursday that they are cutting the capacity for hockey games at BankAtlantic Center by more than 2,000.

“It will create a more intimate environment for our fans when they enter the bowl,'' Yormark said.

“It will also enhance the fan experience and create some scarcity with our tickets. It will also limit the 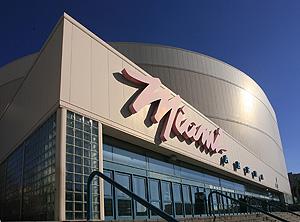 number of promotional tickets we have to put out in the marketplace. .-.-. We think this is the right decision. Go back to the old Miami Arena. What made it so exciting? It was tight, fans were right on top of the action. We played at 99 percent capacity. We think we can go back to that.''

The top six rows in the corners of the upper deck as well as end zone seating will be covered in tarps for most home games. The tarps will be blue in color to blend in with the color of the highest seats in the building.

Those fans who have already purchased tickets in the seats that will be now made unavailable will be upgraded and moved closer to the ice at no extra charge.

Yormark says the tarps will have advertising as well as the team's logo.

“We want the bowl to look symmetrical so that's why we're going all the way around,'' Yormark said. “The reality is, when you walk into a bowl and you see density, an arena full of fans, it automatically tells you your going to have fun, it's going to be cool, you are at a party. A lot of empty seats takes away from the experience. We want a better experience for our fans, a better value for our fans and create a scarcity.''

Unlike the Jacksonville Jaguars – who covered up almost 10,000 seats to try and keep NFL television blackouts at a minimum – the Panthers could remove the tarps for select games.

The NFL told the Jaguars they couldn't pick and choose which games they wanted to have a lower capacity for so the tarps remain up throughout the season. The Panthers have no such concerns.

When big draws like Montreal, Pittsburgh and the New York Rangers roll into town, the tarps will be rolled back. The tarps will also be taken off for concerts and other events.

The University of Miami reduced seating at Sun Life Stadium last season by covering sections in the upper deck and club level with UM branded tarps. The Miami Heat's balcony at AmericanAirlines Arena seats over 3,000 fans. When the balcony is closed, the downtown arena has an official capacity of 16,500. The Marlins also limit seating at Sun Life Stadium, although for the 1997 and 2003 playoffs, all available seats were open.

The Panthers are believed to be the first NHL team in recent history to decrease capacity without adding luxury boxes or other premium seating.

The Carolina Hurricanes curtained off most of the upper deck at their temporary home in Greensboro (capacity: 21,273) in 1998-99, as did the Lightning when they played games at Tropicana Field (then known as the ThunderDome) in St. Petersburg from 1993-96. Under the current configuration, the Panthers capacity is seventh largest in the league according to official numbers released in the league's media guide.

With the upper deck tarps, the Panthers will play in the third smallest arena in the league – just larger than the antiquated arenas in Edmonton (opened in 1974) and Long Island (1972).

Of course, the Panthers arena has much more luxury seating -- including two levels of suites -- than Edmonton or the Nassau Coliseum.

The New Jersey Devils cut around 2,000 seats from its capacity when it moved from the Meadowlands to Newark in 2007 but added premium seating and boxes it did not have at Continental Arena.