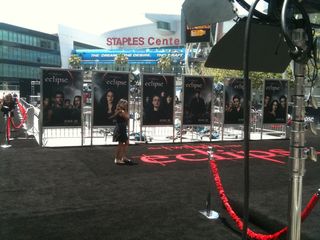 LOS ANGELES -- The NHL Draft seems to be a big deal here in Los Angeles where the red carpet is out and the streets around the Staples Center are blocked off as fans are running around gawking and screaming.

OK, well, the NHL Draft is a big deal. But since it has nothing to do with vampires (or Kristen Stewart) it's not going to get the same kind of coverage in Hollywood as this premier will get.

At least a number of the kids who are here for the draft will partake in the movie experience well.

"You can't do that anywhere but here,'' Cam Fowler said, the Hollywood sign a few miles behind him serving as the backdrop.

Defenseman Erik Gudbranson was invited to be part of the premier tonight, but he's got better things to do. He's meeting with the Panthers and won't make it. He says that's cool, that hockey's way more important.

Goldie is here though, wearing fake teeth to make Gudbranson feel like he really didn't miss anything.

-- PS: For those of you who want instant updates from here, follow us on Twitter or Facebook. I can instant message to those sites very quickly. And I do.

-- Here's my story on Gudbranson, the guy I have been told is going to be a member of the Panthers come Friday night:

– Friday will be a watershed moment in the young life of Erik Gudbranson, an 18-year-old hockey player who will be taken high in the NHL draft. 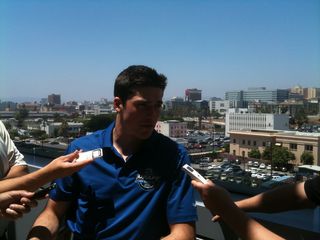 Only the day Gudbranson says he has circled on the calendar is August 18. That's the day his little brother Dennis celebrates his five year anniversary of being in remission from leukemia. At that point, Dennis is considered fully recovered. Dennis, now 13, had a bone marrow transplant in 2005.

“Knowing my brother is safe and is completely cured of one of the worst illnesses in the world means that will be definitely be the biggest day of my life,'' said Gudbranson.

Sometime after 7 p.m. EST on Friday, Gudbranson could be the newest member of the Florida Panthers and make his first trip to the Sunshine State since the Make-a-Wish Foundation flew he and his family to Orlando for a trip to Disney World.

Florida has the third overall pick and will likely take a defenseman. Once forwards Tyler Seguin and Taylor Hall are taken first and second, the draft turns towards strong defensemen in Gudbranson (ranked the No. 4 overall North American skater by NHL Central Scouting), Brett Connolly (No. 3), Cam Fowler (No. 5) and Brandon Gormley (No. 6).

“That's the way the draft is falling, the two forwards and then four back-end guys on defense,'' said Panthers general manager Dale Tallon.

“In the 10 years I've been involved with combines, this is the best I've seen it as far as character guys, personality and size. These are good kids. Very few red flags at all. Obviously everyone thinks the first two are in a class by themselves. But we think from No. 3-50, we're going to get some guys, a lot of top notch players.''

A few signs on Friday pointed to Gudbranson being Florida's choice at No. 3 – with two general managers within the Panthers division saying they are penciling him in as Florida's selection.

Not only is Gudbranson a physical specimen at 6-foot-4 and 200 pounds who plays a tough brand of hockey. But Gudbranson is also a good looking, well spoken player the team will be able to market to South Florida.

On Thursday night, Gudbranson met with the Panthers draft contingent at the Omni Hotel – skipping an invitation to be part of the red carpet at the Twilight:Eclipse movie premier a few miles away at the LA Live complex near Staples Center. Hockey was more important than the paparazzi.

“It will be an honor to be drafted high, a true honor, and I'm not taking away from that,'' said Gudbranson. “But when training camp opens, I'm on par with every other draft pick. I understand that I have to make whatever team takes me.''

With the third pick, the Panthers have plenty of options – but need a hit. The player Florida selects will have a great chance to make the opening night roster, and the Panthers would love to get a player who contributed as much as 19-year-old Dmitry Kulikov did for them last season.

Kulikov was the 14th overall pick last year who only scored three goals with 13 assists for the Panthers but logged heavy minutes and was given a lot of responsibility. 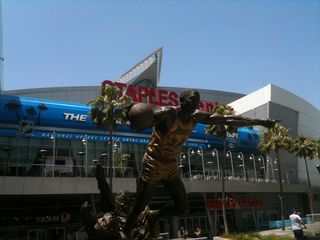 The Panthers also have the 15th overall pick after trading Nathan Horton to Boston on Tuesday. Tallon is open to trading that selection if he gets the right deal – and he expects to be a busy man on Friday. The Panthers are basically an open store with only a handful of players – Kulikov, David Booth, Michael Frolik for instance – are said to be off the market as Tallon tries to build up the roster.

On Saturday, the Panthers have at least 10 more draft picks as the selection process picks up in the second round. Florida has five of the first 50 picks and seven in the top 100 going into Friday.

“We have some excellent options,'' said Scott Luce, the Panthers director of amateur scouting. “If the right guy is there, we're going to take him and not outsmart ourselves. We have lots of selections to use. We're going to utilize them.''