« More Stuff from The Panthers at the NHL Draft | Main | Panthers Trade Official, Keith Ballard Off to Vancouver »

Welcome to the NHL Draft: Home of the Florida Panthers 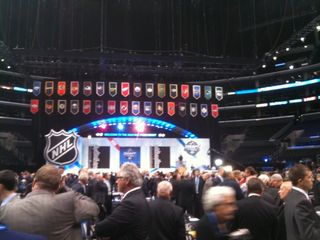 LOS ANGELES -- The Panthers don't do many things well, but they sure know how to steal the headlines around draft time.

Today could be another one of those days.

The Panthers are poised to make another big move as Keith Ballard is said to be as good as gone. Heard last night that St. Louis was very interested in Ballard and Stephen Weiss, although I don't think Weiss is going anywhere.

Ballard is keeping an eye on things as he plays golf in Minnesota. Word is Vancouver is going hard for Ballard. The Canucks have the 25th overall pick tonight.

And if Dale Tallon has his way, Ballard will not be the only Panthers player to become an ex. Rostislav Olesz has been peddled to every team in the league -- including four or five in the AHL and a few in the KHL -- but so far, no buyers. Or takers. Whatever.

I'm going to be roaming the Staples Center draft floor, so for instant updates, follow our Twitter site @OnFrozenPond

Will have blogs throughout the night, but that's where the news is going first (only because it's easier to do on the iPhone than filing a blog post here).

Will keep y'all updated as we go through the night.

-- Even though it's been over a week since the Lakers beat the Celtics, purple and gold confetti continues to fall from the rafters at Staples Center. The Lakers banners in the upper deck have been covered up by black curtains. Rumors that the USC band that plays at Laker games would play the draft were completely made up by me.