Dmitry Kulikov: Ready for Round 2 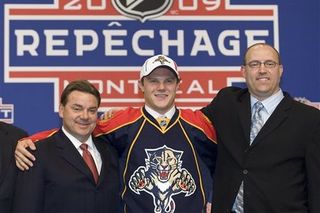 Dmitry Kulikov is back in town working out in Coral Springs saying he's looking to add to what he accomplished last season -- not move backward.

“I've never been satisfied with my previous season because I know I could have done a better job,'' he said.

“But it was still a pretty good year for me. I think I've done a decent job this season of working out, skated for two weeks in my hometown and have kept in shape.

“I know people are expecting things from me. When people expect things, you should respond. You don't want them to forget you.''

Florida's first round pick in 2009 (14th overall), Kulikov made the team out of training camp after getting out of his KHL contract.

Not only did he play in 68 games, but he scored three goals with 13 assists. Very rarely did the 19-year-old Russian look out of place.

With Kulikov, Jason Garrison, 2007 first-rounder Keaton Ellerby and Eric Gudbranson (picked third overall in 2010), the Panthers feel they have a nice young defensive core to build around.

Only the defensive rebuild won't start at the NHL level just yet. While Garrison and Kulikov will start the year with the Panthers, Ellerby is expected to be back in Rochester and Gudbranson will likely be returned to his junior team. If there are injuries out of camp, the Panthers could allow Gudbranson to start the year in Florida. They have nine games to send him back before the first year of his contract kicks in.

Florida does have a fairly experienced blueline coming into camp despite trading away Dennis Seidenberg and Jordan Leopold at the deadline last year and Keith Ballard at the draft. Led by Bryan McCabe, Bryan Allen and Dennis Wideman, only Kulikov and Garrison have yet to play in 150 NHL games.

"I don't think it's young to have a young D, especially when we have veterans like McCabe and Allen here,'' Kulikov said. "I think they're going to help us a lot. People are expecting things for us and we have a lot to prove, not only to the fans, but to our veterans and our coaches. I think we're going to do a pretty good job this year.''