Jacob Markstrom: I Want to Be a Panther 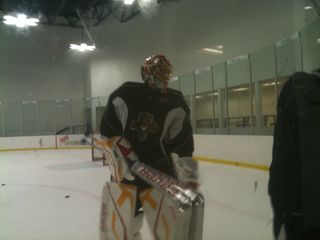 Good afternoon all. Off to the Dolphins game here in a minute to hang out with new assistant GM Mike Santos, and I'm sure this kid's name is going to come up.

I spoke with Jacob Markstrom on Thursday and he seems to be a very engaging fellow.

His English is impeccable and he towers over everyone -- although while no one has ever said this to me, it looks like he could use a few extra pounds. Of course, Craig Anderson isn't very husky and it seems to work for him.

He also has an air of confidence surrounding him.

The kid is good and he knows it. Playing the past two seasons in the highest level of the Swedish Elite League -- and succeeding -- has fueled that outlook.

I will have a full story running on the 20-year-old Markstrom in the coming days (probably Monday or Tuesday), but here are some things I would like to share.

When asked about playing in Rochester:

On learning the North American game:

“It's a whole new environment over here. I'm picking things up and becoming better and better. Rochester is a good team and the AHL is a good league. And I've played on the small rink before. But it's a whole different game in the AHL, NHL. But I want to play in the NHL and everyone in the Florida system does as well.''

Dmitry Kulikov on Markstrom: “He's so tall, he takes away the net and makes it very hard to score against him. I've faced him twice [in 2009] and he was pretty good. He beat us 5-0. He was a wall in the net. We couldn't do anything about it. I remember that. He's going to be a great goalie for us.''