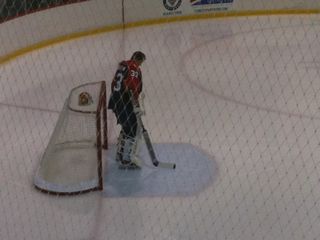 We're now LIVE! and operational from the Coral Springs Incredible IcePlex on the edge of the Everglades with some exciting rookie hockey game action on a beautiful Thursday afternoon.

Got the Diet Coke flowing, TSN SportsCentre on the big screens and Jacob Markstrom in net for the Panthers.

If you are in the hood, come on by. Don't cost nothin. If you are far away, stick around. LIVE! coverage throughout the afternoon.

Again, that don't cost nothin either.

-- Markstrom gives up his first goal as a Panther (not really) as Chris Mueller knocks one through at 5:19 of the first. Preds have now outscored the Panthers 6-0 in this rookie series.

-- Ryan "Ain't Nothin' But A" Thang puts the Preds up 2-0 in the first period, scoring at 15:30 of the first. Almost this entire first period has been played in the Florida zone.

-- Just as I type that, Calla fills Clackson's role by fighting Michael Latta...

-- Preds make it 3-0 just 39 seconds into the period, Mueller bangs one in for his second goal of the night.

-- Gabriel Bourque makes it 4-0 for the Sabretooths...

-- Taylor Beck drives in on Markstrom, slides puck through...Preds lead 5-0 midway through the third...third goal in this series for Beck; he had two last night...

-- Got to hear Mitch's 'Panthersssss..." goal call for the first time as Corey Durocher breaks the scoreless streak for the Cats as he knocks in a puck....Only a few minutes left in this one...

STATS WHEN I GET THEM -- FOR THOSE WHO CARE