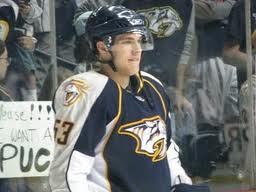 Panthers coach Pete DeBoer said there would be plenty of opportunity for players who go strong in training camp to make this team.

Mike Santorelli, a guy the Panthers front office has liked all along, may have just swiped a gig.

In Wednesday's practice at The Billboard, Santorelli was centering a line with Rostislav Olesz and Cory Stillman.

That part actually isn't the news. The news is that Steven Reinprecht, penciled to be the second line center, was moved to another line. As a winger. Reinprecht was on a line with Shawn Matthias centering and Michael Grabner working the right side.

I have video from Pete DeBoer as well as Santorelli and Reinprecht upcoming.

Santorelli made the Preds out of camp last year but was sent back to the minors in Janurary after not making much of an impact. Santorelli had a two goals and an assist in 25 games with Nashville. He was minus-8 in those games.

So far this preseason, Santorelli has a goal in three games. He's also a minus-2.