« Panthers Notebook: Evgeny Dadonov is Cool with Whatever ... Mark Cullen Out for Some Time | Main | Panthers Visit Rochester Children's Hospital »

Panthers in Rochester: How Long Will It Last? 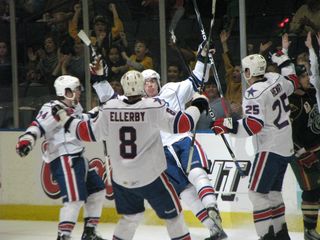 ROCHESTER, N.Y. -- The Panthers have played exhibition games in some strange locales over the past few years, but the site of Thursday's preseason contest actually makes a lot of sense.

It's a wonder why the team hasn't been here before.

The Panthers will play host to the Boston Bruins on Thursday night at Rochester's War Memorial – home to Florida's American Hockey League team. The Americans logo has been freshly painted on center ice, but at least on Thursday, the arena belongs to the NHL teams. Rochester's 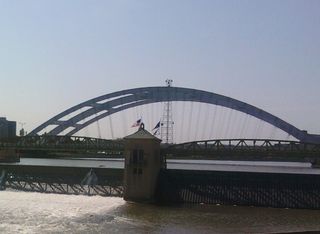 “They are our farm team and I think it's important they get to see our big players,'' said Panthers coach Pete DeBoer. “The fans here know, we used our farm team players an awful lot last year. They had a lot of NHL caliber players last year and I think that's going to be the case again this year.''

The Panthers are bringing some goodwill with them on this trip as the team appears ready to patch things up with the storied AHL franchise.

The Amerks were the affiliate of the nearby Buffalo Sabres for 29 years before the two broke up in 2008 because of finances. The Panthers have been the lone parent team ever since – and there have been rumblings that this might be the last season the two are together. It will be decided in November whether the two teams continue their agreement.

Newly signed enforcer Andrew Peters is one who hopes the Panthers and Amerks keep working together. Recent reports seem to indicate there has been a thaw and the affiliation will continue.

Peters, who will likely start this upcoming season with the Amerks, played parts of three seasons in Rochester while part of the Buffalo organization. His wife is from the Buffalo area, and he owns a home in the area. One reason Peters signed with the Panthers was he knew playing in the minors was a distinct possibility after the Devils bought out his contract over the summer.

“There's no better place to play in the minors than Rochester,'' said Peters. “The fans here are great. The facility and practice facility are first class. It says a lot about the organization that they're connected. One of the reasons I signed with Florida was because if I had to go to the minors, it was the best worst-case scenario out there.''

One of the big complaints coming from Rochester was the man behind the bench. After the Amerks opening round playoff loss to Abbotsford last spring, the unpopular Benoit Groulx resigned and returned to the Canadian junior leagues. Chuck Weber, who won two of the past three ECHL titles in Cincinnati, was brought in. Weber, like Peters, has ties to the Buffalo area. He went to high school and college in western New York and is excited about the challenge of make the Panthers popular here.

“I try to bring a positive attitude, have fun with the players and the fans,'' said Weber, who went to high school in Lockport and the University of Albany. “I grew up 45 minutes outside of Rochester, so that's fortunate for me. It's not very often you get to coach in your backyard.''

-- A group of Panthers with ties to the Rochester area spent part of Wednesday afternoon visiting a local children's hospital. The players brought gifts and played video games with the youngsters. “You can't say no to the kids,'' Peters said. “These visits mean so much.''

-- Tomas Vokoun will start Thursday night against Nathan Horton and the Bruins as Florida rolls out a veteran lineup. Erik Gudbranson, who scored a goal with an assist in Tuesday's 4-1 win at Carolina, is one of a few players who will play in both games.

-- The lineup for Thursday: