« Panthers Gamer: Florida 4, Carolina 1 | Main | Panthers in Rochester: How Long Will It Last? »

Panthers Notebook: Evgeny Dadonov is Cool with Whatever ... Mark Cullen Out for Some Time 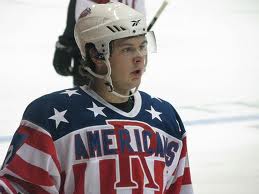 RALEIGH, N.C. -- Panthers forward Evgeni Dadonov caused quite a stir this summer when he reportedly told a Russian media source that if he wasn't playing in the NHL this coming season, he would play in Europe.

Dadonov is currently in training camp with the Panthers and could indeed be sent back to Florida's AHL affiliate in Rochester, N.Y. The 21-year-old forward is having a strong preseason, however, and just might make the big squad.

Either way, Dadonov says he will do whatever the Panthers think is best.

“They were asking me what I was going to do,'' Dadonov said. “All I said was 'maybe Florida sends me back to Russia.' It's not my option. Whatever Florida tells me to do, I'll do. They say go back to Rochester, that's where I'll go. I'd like to be in Florida. I think I'm ready to play in the NHL, but as a forward, I have to score.''

In his first year in Rochester last season after playing three years in his native Russia, Dadonov scored 17 goals with 23 assists. The Panthers didn't call him up until late in the season and he only appeared in four games. Dadonov was held without a point in those four games.

“He's in that big mix and one thing he has is skill,'' said DeBoer. “He has a dynamic element to his game and I give him a lot of credit. He wasn't the best conditioned guy last year, but he's lost a lot of weight, a lot of baby fat. He's made a real statement to me real far that he's serious about being an NHL player. He's not a big guy but finds a way to get to the net.''

The Panthers like the way Dadonov plays. Not only is his offensive talent apparent, but he also plays a gritty game and isn't afraid to battle in the corner for pucks or drop back and play defense. It's a two-way game that may come into play when the Panthers are going through final cuts in the coming weeks.

''I think he's really developed his offensive game,'' Rochester coach Chuck Weber said. “He wants to be a pro here in North America. You see some mistakes, but his general game is impressive. He's going through the process, going up the ladder. He'll appreciate it when he makes it.''

Mark Cullen's training camp ended before it started after he ruptured an Achilles heel during agility workouts during physicals last Friday morning. The Panthers hoped it was only an ankle injury, but Cullen underwent surgery on Tuesday at Doctors Hospital in Coral Gables.

Cullen, brother to Minnesota center Matt Cullen, was expected to start the season in Rochester although he was hoping to have a strong camp and be with the Panthers at the onset.

-- Carolina signed Mike Skinner, the seventh overall pick of the 2010 Draft, before Tuesday's game. The Panthers still need to sign 18-year-old defenseman Erik Gudbranson (third overall pick) if it wants to keep him around for a nine-game tryout this season.