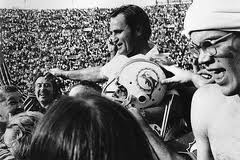 The Panthers have another season ticket promotion going on, and instead of tying it to LeBron James or Dan Uggla, they are hitching a ride on the Dolphins.

Why not? Even though everyone is fired up about basketball starting up, this is still Dolphins Country. They rule the roost. Now, the Panthers are trying to pull in some of that cache.

According to the team, from today until kickoff on Sunday, fans can purchase season tickets in "incredible locations" for $19.72 per game -- in honor of the 1972 perfect season.

“We’re all excited about the start of football season and hoping for another perfect season from Miami’s favorite football team,” team president Michael Yormark said. “In honor of that, we’re offering fans an incredible deal on Florida Panthers season tickets at just $19.72 per game.”

Mercury Morris gives it a thumbs up.

-- There hasn't been that much action on here mainly because I've been taking some time off. My final blast of vacation is here and I'm using it so I don't lose it. Will be out of town for the first days of rookie camp, but will be back in the game starting on Tuesday. Next thing you know, it'll be April.

So for those of you who can't wait to get their hockey fix on, your time is coming.