Rostislav Olesz: Playing With an Edge? 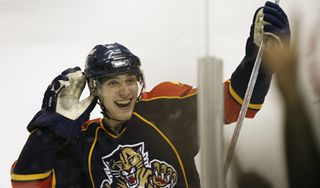 For Olesz, that's not a good thing.

“All the conversations between me and Rusty are over,'' DeBoer said after Saturday's opening of training camp. “We've talked it to death. It's 'Show-Me' time. He's in good shape, conditioning isn't an issue. He has to come out and show me, his teammates, everyone that he can be the player he's capable of being. Everyone sees the package there. It's getting it done.''

Olesz is perhaps the most maligned player on the Panthers roster, with DeBoer and the Panthers demanding more than the 24-year-old has produced.

Last year was a disaster for Olesz, even though he tied his career high with 14 goals. The seventh overall pick in the 2004 Draft, Olesz showed much promise in his first three seasons with the team. In 2007-08, Olesz scored 14 goals with 12 assists in 56 games. After that season, then-general manager Jacques Martin gave Olesz a six-year deal worth $18.75 million.

When Olesz's game dropped off the following season, players inside the locker room took umbrage at how much he was making. Olesz ended the 2008-09 season, his first with the new pact, with four goals in just 37 games because of various injuries.

Last year, Olesz started the season off well, creating a ton of scoring chances while scoring three goals in the opening month. But as the season wore on, Olesz's game hit a wall. Olesz went an astonishing 21 straight games without registering a single point – something almost impossible for a forward playing 16-plus minutes a game.

“I can't think about last year, I just have to focus on this year,'' Olesz said. “I can't do anything with last year except learn from it. I think everyone will see I am a different player on the ice than I was last year. The season will show. I'm going to be more selfish and that will in turn help the team. The season will show.''

Throughout that stretch, Olesz heard it from DeBoer and the rest of the coaching staff and he seemed to go into a shell. When the season was over, then-GM Randy Sexton talked passionately about trading Olesz just to get him off the team.

Olesz was not traded and says he is glad he wasn't.

“It's a mindset for him,'' said center Stephen Weiss. “When he wants to use his strength and he's mad, you can see what he can do. When he doesn't, like anyone else, they go unnoticed. We need to get him cheesed off more. Get him to play with a chip on his shoulder. When he has that, he's hard to stop. We need him to step it up, take his game to the next level. But he's not the only one. We all need to do that.''

On Saturday, Olesz showed a harder edge and a bigger phsyich. When talking about his travails the past few seasons, Olesz didn't smile, spoke in a monotone and stared straight ahead.

He definitely looks the part of a guy upset with what has transpired on the ice over the course of two seasons. The Panthers hope it's for real.

“We expect a lot of Rusty. I think he's one of our best players. A real horse,'' said team captain Bryan McCabe. “He can control the game when he's on top of it. For us to be successful, he needs to be one of our top guys. He works hard, comes to camp in great shape. Everyone needs to hold everyone accountable and Rusty knows what he needs to do out there. He's come in with a great attitude and I really expect great things out of him.''

Olesz's role on this team has yet to be determined, some thinking he may start the season on the fourth line – making him one of the most expensive grinders in the league. But if Olesz has a strong camp and gets back to his old form of getting in front of the net and working the puck around for his teammates, he could find himself back on a scoring line.

Olesz says he doesn't care where he plays, says he has no individual goals this year. He says he wants to be a better teammate and do his part in snapping the Panthers NHL record-tying streak of postseason futility. Florida hasn't been to the playoffs since 2000. One more season outside the dance and the Panthers take the record as their own.