Colin Campbell to Florida Panthers: We Made a Mistake, Would Like that one Back 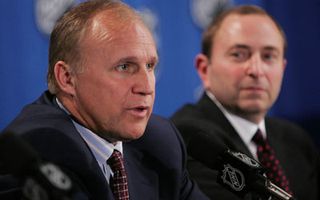 OTTAWA -- Spoke with NHL discipline czar Colin Campbell this afternoon regarding the Colton Orr goal in the third period of Toronto's eventual 3-1 win over the Panthers on Tuesday night.

Campbell, who also supervises the officiating in the league, basically said it's pretty apparent that in watchng the tape that Orr should have been called for interfering with Florida's Scott Clemmensen.

Not only should that game-winning goal (which bounced off Orr as he was going to the ice with Clemmensen) not have counted, but the Panthers should have been on the power play.

"It doesn't happen often, but it's certainly a call you wish was made differently,'' Campbell said.

Definitely could have gone a different way, but, the Panthers had their chances throughout the game and only solved Jean-Sebastien Giguere once. Need to do a little more than that.

Anyway, it was a bad call and it probably cost the Panthers a point. The way they were playing (safe) at the time, going to overtime was just fine by them.

Campbell, the father of former Panthers winger Gregory, said rookie ref Francis Charron was the one who didn't make the call.

Former director of officiating Stephen Walkom (who has returned to the game as an on-ice official) was up and apparently blocked. They just missed the call. It happens. And, no, you can't review it.

Here's what Mr. Campbell had to say:

"We had a rookie referee [Francis Charron] in the game, right by the net. Some might say, well he's a rookie, look what happened? Well, we had one of our most veterans, one who did the Finals in Stephen Walkom out high.

"When I examined the tape, there are a few players between Stephen Walkom and its quite obvious if they had the chance to see it again, you would hope the call would be made that it was interference on a goaltender. This happens. It doesn't happen often, but it's certainly a call you wish was made differently.''

As far as this potentially costing the Panthers a point or two early in the year, Campbell knows exactly what a point meant to the Cats back in 2009 when they lost the final playoff spot to Montreal by a point.

"You look at its not March, it's not the playoffs. But, still, two points is two points. Florida's been in position before where one point made the difference of being in the playoffs or not. It's tough anytime you get caught in a situation like this where a penalty appears to be obvious, and in this case, it led to a goal being scored.

And perhaps, on this play – and I don't want to put words in the referee's mouth – it would have been a two-minute penalty assessed as well.''

As far as coaches wanting something like this reviewed, Campbell pretty much feels that if you review plays like this, you might as well review everything. And then the game takes six hours to play.

"It's not reviewable and sometimes teams have asked should this be included in the review process. At the managers meeting last year, we asked if hockey operations could review a four-minute penalty on high-sticking because sometimes it is called and the video shows it was his teammate's own stick that cut him in the quick foray that happened.

"We told managers this is a tough, tough call and it could be a two-goal turnaround.

"The officials are trying to do it right, but on further video review, sometimes you say 'man that's wrong.' We understand, we're going to have to live with it. Where do you stop?

"Other people have asked if there should be one coach's challenge? Where do you stop, what do you allow them to challenge?

As far as the Panthers go, tough cookies. The Cats are 0-for-2 on controversial, game-winning goals. In the season opener, Edmonton's Shawn Horcoff appeared to kick the puck past Tomas Vokoun. That play went to Toronto for review and it was determined Horcoff directed the puck with his foot but didn't use a 'distinct kicking motion.' Dale Tallon was pretty cheesed about that one as well.

"Unfortunately everything was in place to go against Florida last night. It happened late, went in there net and they had hardly any chance to come back. It could have been a no-goal and a power play chance for Florida. It was a tough situation for our referees.

"Terry Gregson, our director of officiating, was at the game and he spoke with both referees after the game. They probably would like that call back if they had the opportunity.

"Florida may say they had a call go against them in Edmonton and we have another tough call, we're not catching up, we're getting behind.

So what if something like this happened in the seventh game of the Stanley Cup Finals?

"I would go on a long vacation the next day. And quickly.

"I told Dale, I remember a play last year where a puck was shot in from about 80 feet and it skipped by Vokoun into the net. Players make mistakes, coaches make mistakes, managers make mistakes. A mistake was made here where a young referee probably wants that call back or Stephen Walkom would like a better view. It's unfortunate.''

Thanks to Colin Campbell for taking time out of his day to talk to us.