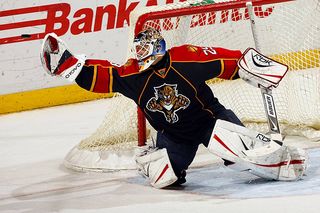 Nice honor for Tomas Vokoun today as he was named the NHL's First Star of the Week.

Marian Hossa and Ryan Getzlaf were also honored by the league. Here's the official NHL release:

Vokoun stopped 89 of 91 shots in posting a 2-1-0 record with a 0.67 goals-against average and .978 save percentage, highlighted by back-to-back shutouts. Vokoun turned aside 33 of 35 shots in a 2-1 loss to the Vancouver Canucks Oct. 11, stopped 27 shots in a 3-0 victory over the Calgary Flames Oct. 14 and made 29 saves for his 40th career shutout as the Panthers blanked the Tampa Bay Lightning 6-0 in the home opener at BankAtlantic Center Oct. 16. Vokoun improved to 2-2-0 on the season with a 1.26 goals-against average and .952 save percentage. Entering his fourth season in Florida after an eight-year stint with the Nashville Predators, Vokoun is one of just three active goaltenders to have posted 20-plus victories in each of the past seven seasons, joining Roberto Luongo and Marty Turco.

Hossa recorded six points (four goals, two assists) in four games last week, helping the defending Stanley Cup champion Blackhawks post a 3-1-0 record. Hossa scored two goals, including the game-winner, in a 4-3 win over the Buffalo Sabres Oct. 11, registered an assist in a 3-2 loss to the Nashville Predators Oct. 13, recorded one goal and one assist in a 5-2 victory over the Columbus Blue Jackets Oct. 15 and closed the week by recording one goal in a 4-3 win over the Sabres Oct. 16. The 31-year-old Stara Lubovna, Slovakia native leads all NHL scorers with nine points (five goals, four assists) and has recorded points in all six games -- his best start since 2000-01, when he recorded points in each of his first nine contests. Hossa missed the first 22 games in 2009-10 following off-season surgery.

Getzlaf led all scorers last week with eight points (two goals, six assists) in four games as the Ducks posted a 2-1-1 record. The new Anaheim captain sparked his club to its first win of the season by recording a goal, three assists and a +2 rating in a 4-3 decision over the Vancouver Canucks in the home opener at Honda Center Oct. 13. He notched one goal and one assist in a 5-4 shootout loss to Atlanta Thrashers Oct. 15 and closed the week by recording two assists and a +3 rating in a 3-2 victory over the Phoenix Coyotes Oct. 17. Getzlaf rose to fourth in the NHL scoring race with 2-6--8 in six games.

-- Winger Kenndal McArdle was placed on waivers today at noon so he has one day to clear. If he does, McArdle will be off to Rochester. You had to have seen this coming; McArdle only played in one of the first four games and got just over six minutes of time in that one.

If he's going to sit in the press box every night, he might as well go to Rochester and get some playing time. Just my opinion.The risk is, you might lose him in waivers. But at this point of the season, I would guess the Panthers feel that risk is minimal.

-- Defenseman Jason Garrison (groin) is being listed as day-to-day after being hurt on Saturday night.