« Panthers Mix Things Up in Calgary ... Huffing and Puffing ... Beezer is Honored | Main | Shawn Matthias Getting Good Opportunity With Panthers; Thursday vs. Flames » 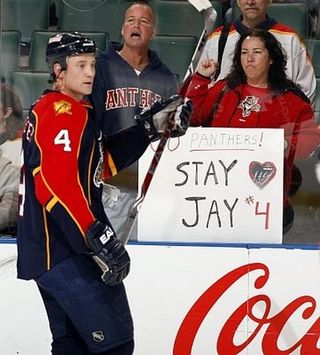 CALGARY -- When Jay Bouwmeester traded in the near autonomy of being a hockey player in South Florida for Canada, he knew he was diving into a media fishbowl.

Bouwmeester, who grew up a few hours north of here in Edmonton, knew how much hockey meant to these communities and how media coverage borders on fanatical.

“It is what you make of it and how much you pay attention to it,'' Bouwmeester said Thursday morning before his Flames took on the Panthers at the Saddledome. “No one wanted things to go the way they did here last year. People take it a little more hard here.''

In 2009, then-GM Randy Sexton traded the Bouwmeester's negotiating rights to Calgary as it was apparent Bouwmeester would never sign a long-term deal in Florida.

Once Bouwmeester signed the five-year, $33.5 million contract, the rules changed. Fans expected a lot  -- and felt let down when he scored just three goals after 15 in each of his previous two seasons. The Flames missed the playoffs, and a lot of blame was placed on Bouwmeester.

Just before the season started, Bouwmeester was taken to task by former player and current Canadian broadcaster Michael Peca. On TSN, Peca said that “I enjoyed playing against him. He turned pucks over, he made the game easy to play. He wasn’t a tough guy to play against, he didn’t play tough.''

Bouwmeester chirped back that he doesn't listen to television analysts and didn't remember much about Peca as a player himself. “He was on the tail end of his career when I played him,” Bouwmeester said.
Bouwmeester's image as a player, all but untarnished in Florida, took a hit.

“He knew what it would be like here, but he doesn't read papers or pay attention to it,'' said Jokinen, in his third season with the Flames. “He was getting criticized a lot last year and we got asked 'what's wrong with Bouwmeester' all year. But for 82 games, in 75 he was the best player we had.''

While Bouwmeester gets the blame heaped upon him, he remains a pretty popular figure among the Panthers. Bouwmeester remains friends with a number of players and coach Pete DeBoer, who only had Bouwmeester for one season, continues to rave about his talents.

-- Jokinen, the Panthers former captain and the franchise's all-time leading scorer, says he is hopeful the franchise is going in the right direction.

“They've gone through a lot of changes and I hope for the best, I hope they have it figured out,'' said Jokinen, who keeps his offseason home in Broward County. “It looks like they have a good guy now leading the charge in Dale Tallon. It's been tough times for the fans in South Florida. They still have fans and support, but it's tough for them year after year missing the playoffs.''