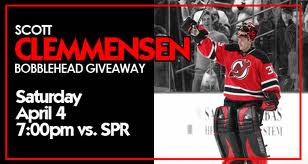 With the way Tomas Vokoun is playing for the Panthers these days, fans may not remember the team has a backup.

Yes, Scott Clemmensen is still with the team.

Vokoun has started each of Florida's first four games this season and has been terrific. When the league announces its three stars of the week on Monday, don't be surprised to see Vokoun listed. After beating the Lightning 6-0 in Saturday's home opener, Vokoun has pitched consecutive shutouts, stopping 56 shots in the process.

In four games, Vokoun has stopped 99 of 104 shots (95 percent). Coming into Sunday, that was second best in the league for goalies who have played three games or more.

Florida doesn't play in a back-to-back contest until a home-and-home series against the Hurricanes on Nov. 5-6.

If coach Pete DeBoer sticks to his plan to let Vokoun keep going, that means Clemmensen may go more than a month without game-time experience. Clemmensen hasn't played since beating Boston in an exhibition shootout on Sept. 25.

Goalie coach Robb Tallas says that Clemmensen is completely prepared and doesn't think rust will be a factor when Clemmensen finally does see some time. Clemmensen got two starts in the opening month last season.

“Sometimes it is a concern because you want to keep people fresh,'' said Tallas. “But Clemmer showed us last year that he can wait in the weeds and be ready. The important thing for him is practice time. He's taking it serious and it's my job to make sure at the end of practice that he gets shots that he would see in a game, not just open ice practice. That helps him stay fresh.''

Florida went 1-for-4 on the power play, giving them a success rate of 6.7 percent this season – ranked 27th in the league.

“That was huge for us,'' said David Booth, who scored twice on Saturday. “Our special teams are going to make a difference for us. I hope that goal gets us going.''

On the flip side, Florida's penalty kill has been outstanding since new assistant coach Gord Murphy took over. The Panthers were strong killing off penalties during the preseason and that carried over into the regular season.

Florida and Washington are the only teams to have not surrendered a power play goal. The Panthers are 8-for-8 in killing off penalties as Florida has been good about staying out of the penalty box. Washington has killed off 21 penalties.