RALEIGH, N.C. -- When Eric Staal scored the first of his two goals against the Panthers on Saturday night, it came with his Carolina Hurricanes holding a two-man advantage on the ice as Florida was forced to play shorthanded because of penalties.

A 5-on-3 advantage for a lengthy period of time is almost an automatic goal for the team with the edge, but this season, that hasn't always been the case for Florida's opponents.

On Friday night, the Panthers took successive penalties giving the Hurricanes a two-man advantage for the whole two minutes. Florida, thanks to smothering defense from the likes of Marty Reasoner, Dennis Wideman and Mike Weaver, killed it off. Reasoner drawing a penalty with 20 seconds remaining most definitely helped. But Florida's penalty killers have come up huge throughout the young season as the Panthers have the third-highest success rate in the league. 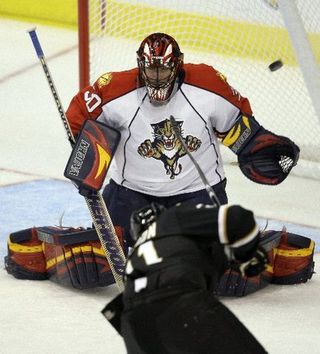 “Our kill has been good and has bailed us out at times,'' said goalie Scott Clemmensen, who faced down 10 power plays in two games against Carolina this weekend. “Look at guys like Reasoner and Weaver and Dvorak. They've been in the league for a while for a reason. Their hockey sense is so great.''

A big part of Florida's success on the penalty kill has been the team's propensity to stay out of the penalty box all together. The games against Carolina were an anomaly this year as the Hurricanes had 12 power play chances against the Panthers. Coming into Friday's game, the Panthers averaged 2.4 power plays allowed per game.

Even counting the games on Friday and Saturday, Florida's 36 penalty kill opportunities is fewest in the league. On the flip side, the Panthers have had the fewest power play chances in the league with 37 and are third-worst with a 8.1 percent success rate.

“It always seems with Carolina they have the edge on us on special teams for whatever reason,'' David Booth said. “This will win us and lose us games coming down the season. We'll go through some stretches when we draw some more penalties and we'll need to take advantage.''

New assistant coach Gord Murphy – a defenseman for the Panthers from 1993-99 – took over the penalty kill duties from Mike Kitchen. Although players have raved about his new system since training camp, Murphy credits the additions of Weaver, Wideman and Reasoner for Florida's improvement.

“The guys bought in right from training camp and there's been exceptional attention to detail,'' assistant coach Gord Murphy said. “But the truth is, penalty killing is all about goaltending. And we've had that, had it since Day 1.''

-- The Panthers return to practice at their training facility in Coral Springs on Monday morning. Practice begins at 10 and is open to the public.