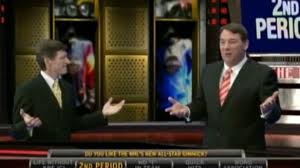 BOSTON -- Gots to give Donny over at Litter Box Cats credit for coming up with this video.

Apparently during the NESN (New England Sports Network) pregame show, announcer Jack Edwards blasted the Panthers, saying no one cares about the team -- either in South Florida nor leaguewide.

Edwards, best known for his work on ESPN back in the day, also said the Panthers should move to Quebec.

I guess he isn't paying attention to what's going on in Columbus, Atlanta and Long Island, eh?

Mike Milbury, of course, was in the middle of all this as well.

Milbury, best known for his work as GM of the Islanders, probably won't say the Islanders need to move. Yet he always says the Panthers should.

Anyway, I wouldn't have posted this had not my email account just blown up with people asking me about it.

First off, the segment was called "Two Minutes for Instigating" and you had Edwards and Andy Brickley playing good cop/bad cop with Milbury 'moderating' the debate.

Someone had to blast the Panthers (yes, there is plenty of material there) and Edwards did it with his usual relish.

At the end of the day, who cares? The NHL has much bigger problems right now than the Florida Panthers.

Oh, and Quebec may be hockey-mad, but they have little corporate support and no arena. So this is really a non issue right now.

Now if Edwards wants to say the Panthers should move to Kansas City, well, we might want to start paying attention.

Of course, I doubt he or Milbury were advocating the Bruins move out of Boston when they were drawing flies leading up to and coming out of the lockout. How about the Penguins about five or six years ago? Couldn't give away their tickets. Same with Calgary and Edmonton not too long ago.

Winning sells my friends, and the Panthers haven't done it in so long few even remember what it was like. But for those of us who were around in the early days -- and even the early days in Sunrise -- we remember that a winning Panthers team was a hot ticket.

There's a reason why H. Wayne built that arena out in the Everglades as big as he did: Because he could sell tickets to it. Now with the team losing, well, there are tarps in the upper deck and free tickets at Sharpies sub shop.

But that doesn't mean it will be like this forever. If the Panthers start winning, their fans will follow.

Just like the fans came back in Pittsburgh, Calgary and Edmonton.

Oh, yeah, in Boston too.

-- Just ran into Dale Tallon and asked him his thoughts on this. I knew the answer. He was already sick of the 'when are the Panthers moving' storyline in August.

Tallon, you might recall, saw some pretty pathetic crowds during his three decades in Chicago. Lo and behold the team starts winning and United Center is now the place to be seen -- when the Blackhawks are playing.

"I think our fans have been through quite a bit over the years,'' Tallon said. "We have very loyal fans. And we'll get more of them, you watch. We have an up-and-coming team. We're fine.''