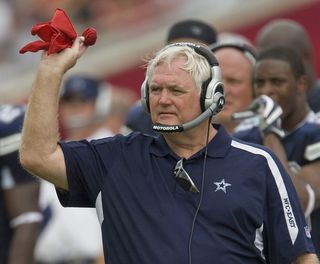 Dale Tallon's proposal to have coaches have a chance for a video review like NFL coaches was on the agenda at Tuesday's GM meeting in Toronto. Only it didn't go far.

According to the Canadian Press, the league's GMs turned it down.

"We had a lot of conversation about it but it's a dead issue," Tallon told the CP.

The stimulus for Tallon putting the issue on the table was Florida's loss in Toronto on Oct. 26 when Colton Orr collided with goalie Scott Clemmensen right as a shot was coming on net. The puck hit Orr as he and Clemmensen crashed to the ice and went in; it turned out to be the game-winning goal.

On Monday, Leafs GM Brian Burke blasted Tallon's plan. Believe it or not, Tallon and Burke are friends.

“Talking about a coaching challenge in response to one goal is like killing a house fly with a bazooka,” Burke said. “All of a sudden, we’re talking about a rule change because of one goal. Our group gets paid to not panic on rule changes and not overreact. This, to me, seems like an overreaction of the highest magnitude.

"We think we have the best officials in the world and we don’t need to handcuff them with needless replays.”