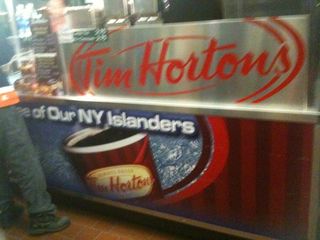 UNIONDALE, N.Y. -- The Panthers had been shutout for five straight periods heading into the second on Saturday night, but if they were concerned, they sure didn't show it.

The Panthers were, after all, playing the hapless Islanders.

Florida turned a one-goal deficit into a three-goal lead in a second period that was Florida's best 10 minute showing of the season. The Panthers scored four goals within a span of eight minutes to hand the Islanders their 12th straight loss as Florida ended its road trip on a high note with a 4-1 victory at Nassau Veterans Coliseum.

The Panthers kick off a three-game Thanksgiving week homestand Monday against Pittsburgh with wins in four of their past six. The Panthers went 2-2-0 on the road trip.

“It's a solid win: Three games in four nights at the end of a road trip and coming off an emotional game in Boston,'' coach Pete DeBoer said. “The table was set for them with a new coach and a couple days off. It could have been a different story but we took care of business and got the win. It wasn't textbook but it was an important two points.''

The Islanders took a rare lead in the first period when Bryan McCabe sent a weak clearing pass from behind the net right onto the stick of Matt Moulson who teed it up and sent the puck flying past Tomas Vokoun. New York hadn't led in a game since Nov. 11 against the Sharks – an eventual 2-1 loss that at least got the Islanders their only point in this horrific losing streak.

Florida could have been down two or three goals in the first had John Tavares not missed an open net or had defenseman Dennis Wideman not swept away the puck off a Moulson shot with Vokoun out of position.

“Vokoun played very well, stood on his head and made saves when we needed them,'' Wideman said. “They are going through a little slide, but that's a team that's going to win some games. They keep playing like that, the bounces will go their way. They had a lot of chances, made it hard on us early.''

With only a one goal deficit to climb back from, Florida came out firing in the second. Mike Santorelli put the Panthers on the board when he scored off a pass from Shawn Matthias, with Marty Reasoner scoring 39 seconds later off a nice feed from local favorite Chris Higgins.

Santorelli later scored his second of the night for the first time in his career with Stephen Weiss finishing things off at 10:21 of the second. Santorelli now has four goals in the past five games.

“It was the first two goal game for me so that was nice. I'm just happy with the win,'' Santorelli said. “We put 40 shots on Boston and it was nice to see them go in. We stuck to it. They came out hard but we weathered it. Good win.''

The Panthers franchise record for goals in a period is six set in 2000, but the Panthers never really challenged that mark despite more chances. The power play, which has to be a big concern to the Panthers, was shutout once more on Saturday. Florida had an extended two-man advantage in the third yet failed to score and went 0-for-6 on the power play.

Yet, once again, the Panthers penalty kill was stellar as Florida killed off four penalties – including a 5-on-3 chance late in the first and early in the second. Santorelli's first goal came soon after Florida killed off a good Islanders chance.

-- The Panthers injury list may get a little longer as Weiss left the game in the second period with an ankle injury and it appears the Panthers are going to make another call-up from the minors. Weiss has been battling an ankle injury for the past few weeks. The Panthers are already without regulars Steven Reinprecht (groin), Rostislav Olesz (broken finger) and Steve Bernier (orbital bone fracture).

The Panthers made a roster addition late Friday night as center Bill Thomas was called up from Florida's AHL affiliate in Rochester, N.Y. Thomas has been strong for the Americans, scoring seven goals with 17 assists – including six goals and eight assists in his past nine games.

Unlike some who come up from the minors, Thomas has been around. The 27-year-old from Pittsburgh has now played in 57 NHL games with Florida, Phoenix and the Penguins. He has nine goals and 20 assists during his NHL playing time.

-- David Booth's 14 shots in Boston on Thursday was the most shots taken by a single player since Minnesota's Marian Gaborik did it in 2006. It also tied the franchise record set by Pavel Bure in 2000. Unlike Gaborik and Bure, however, Booth failed to score as the Panthers were shutout 4-0.

-- DeBoer and Islanders coach Jack Capuano have known each other for decades, dating back to their playing days with the old Milwaukee Admirals of the IHL. Saturday was the first time they coached against each other as Capuano made his NHL coaching debut Wednesday against the Lightning.

“I’m sure neither of us back in those days thought we would be coaching in the NHL,’’ DeBoer said. “We both took different paths here. As tough it is to see someone in the fraternity lose their job, it’s nice to see someone get rewarded, who has paid his dues and gone through the right way.’’