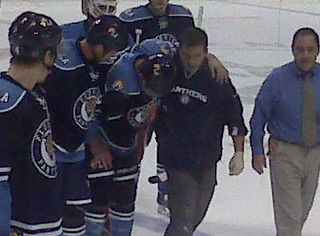 Florida Panthers winger Steve Bernier was alert and drinking bottled water as he was put into a Sunrise Fire & Rescue ambulance apparently headed to Cleveland Clinic in Weston.

Bernier had a nasty cut under his right eye as the Panthers fear he has a broken cheekbone.

Bernier was hit in the face by Minnesota's Brent Burns after play had ended in Florida's 2-1 win over the Wild at BankAtlantic Center. Burns took the last shot of the game and was shoved/checked by Bernier; Burns took exception, turned and popped Bernier in the face while holding his stick.

The first punch was a facewash with Burn's right hand. Then he slugged Bernier with his left -- hitting him square in the face with the business end of his stick. That's what did the damage.

“It's disrespect for the game,'' said Florida defenseman Mike Weaver. “Why do you need that? A player needs to respect another player.''

Burns was given five minutes for fighting and a 10-minute game misconduct after the game. Cal Clutterbuck was also given five for fighting. Florida's Bryan Allen was charged for cross-checking.