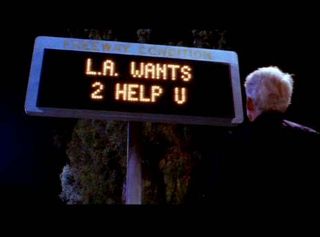 LOS ANGELES – As his teammates took off their equipment in silence, Panthers goalie Tomas Vokoun muttered obscenities under his breath as he tore off his gear.

Vokoun ripped off his skates and threw them into his bag. He then pulled off his pads with such force one wondered if his shoulder was coming with it.

After dragging his gear into the hallway at Staples Center, Vokoun walked to the shower with a look on his face that would have made anyone in his way move. And quick.

Thursday was one of those nights for the Panthers.

Despite playing a strong game for much of the night, the Panthers gave up two goals in the third period – one early and one late – as the struggling Kings stormed back to beat the Panthers 3-2.

Anze Kopitar's shot with 2:43 remaining was the killer for the Panthers as they have dropped five of the past six and continue to lose ground in the standings. Florida is 8-2 this season when leading going into the third period – its other loss under such circumstances coming last Wednesday in Sunrise against the Bruins.

“After Thursday against Anaheim, we needed to bounce back and play solid hockey for 60 minutes,'' said Radek Dvorak, who had a number of key shots stopped by goalie Jonathan Quick, including one with less than nine minutes left in a tie game.

“We have to learn how to win close games. We played well, but at the end, it's 3-2 for them. It's a tough loss. We did a lot of good things like we have for a lot of the season. But we haven't won. It's real tough but we have to bounce back. Take the positive play from tonight and look forward to the next game. It has to start in Phoenix and that's the bottom line.''

After a disappointing performance in Anaheim Wednesday night, coach Pete DeBoer put his team on the ice for a rare day-after practice prior to the game. DeBoer said one reason he did so was to purge his players memory of that game and it seemed to work as the Panthers played a strong game against a Los Angeles team that had lost seven of eight and scored just four goals in its previous four games.

“It would have been nice to get at least a point out of that. It's deflating to say the least,'' Stephen Weiss said. “To put so much into the game against a good team like that and get scored on late, it hurts for sure. We just have to bounce back.''

The Kings, shut out in Anaheim on Monday, scored first as Jarred Stoll scored on Vokoun with a shot from the right circle midway through the first.

Florida was undeterred by the early deficit as Michal Repik made up for a minus-3 rating in Anaheim as he tapped in a loose puck that bounced right to him off the back boards just over three minutes later to tie the score.

David Booth's offensive struggles have been well documented as the Panthers left winger came into the night without a goal in his previous 12 games.

Booth, who led the Panthers in goals two seasons ago, gave Florida its first California lead since Bryan Allen beat the Sharks in overtime last spring when he whipped a shot from the circle to beat Jonathan Quick five hole.

Since becoming a regular with the Panthers, Booth's longest scoring drought was 11 games – that coming in the year he lead Florida with 31 goals. He scored four in the five games following that.

“It's good to see anyone score, but especially him,'' Weiss said. “He's a guy we need and has been struggling to just get one. Hopefully it keeps going.''

Florida led 2-1 at the second intermission but the lead didn't last. Florida put some pressure on Quick at the onset of the period but couldn't get anything through. The Kings tied it less than three minutes into the third when Peter Harrold fired off a slap shot from the slot.

“We played a good game but have said that before,'' Weiss said. “Playing good games doesn't mean crap in this league. Certainly everyone played their hearts out and left it out there. It wasn't good enough. That was one of our better games as far as that was.''

Said DeBoer: “We played the way we wanted to play, executed the game plan but their big guy Kopitar gets one at the right time. They got a couple key saves in the third to keep them in the game and their best player gets the winning goal. That was the story.''

-- The Panthers played without winger Chris Higgins because of a foot infection. DeBoer said Higgins somehow got a cut on his foot and it's infected enough that he was wearing a loose fitting tennis shoe with his suit as he limped around the arena on Thursday.

-- Florida concludes its west coast swing Saturday night against Phoenix. The team plans to hold an afternoon practice at the Coyotes arena in Glendale, Ariz., on Friday afternoon.