Florida Panthers Take in the Sights and Sounds of Nashvegas ... Tomas Vokoun Confident after Washington Shutout ... Higgins Has Staph Infection 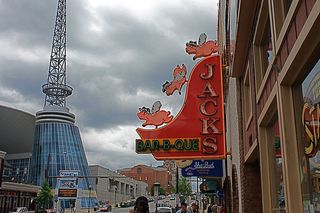 NASHVILLE -- It's a cold and blustery day here in Music City, but that hasn't stopped the Panthers from checking out the town.

A good number of players (and broadcasters, coaches and a certain sports writer) had some of that famous Jack's BBQ for lunch. It was delightful.

And I don't care if country music isn't your thing, you'd get into it a little here. Live music just about everywhere you walk.

The Panthers never had a goalie controversy, but after Scott Clemmensen beat Phoenix in a shootout last Saturday night to snap a three-game losing streak, the team's coaching staff made sure one wasn't created.

Instead of going back to Clemmensen for the next game, Tomas Vokoun was put back in. The Panthers basically told Vokoun he's their guy. And that confidence has spilled over. Vokoun wasn't happy about giving up three goals to Colorado on Tuesday, but he could find little wrong with Thursday's performance in which he stopped all 36 shots he faced in a 3-0 shutout win against the powerhouse Capitals.

“He is his worst enemy sometimes because he takes things so serious and he analyzes everything,'' goalie coach Robb Tallas said. “He wants perfection every night and you see that in how he prepares. He was trying to do too much. If he relaxes and let the play come to him, he can time it and be there when it's happening. That's what happened [Thursday]. He was patient. He reacted.''

Tallas said he thinks Thursday's game was Vokoun's best over the past two seasons. When Vokoun wasn't trying to be perfect, he just about was.

“I was trying to do everything out there and that's just a recipe for disaster,'' Vokoun said. “You don't focus on the individual play, you're just trying to do everything. I can't play that way. I need to relax and have fun, just do my thing. It's like golf: When you try to kill the ball, you hit it 10 feet. When you relax, you hit it 300 yards.''

Vokoun will be back between the pipes Saturday when the Panthers visit Nashville. Vokoun was an original member of the Predators and played here from 1998 until being traded to the Panthers in 2007.

He'll be challenged in a different way than he was on Thursday as the Predators don't have the firepower the Capitals do – but they do score timely goals and work hard in front of the net. In many ways, the Predators play a lot like the Panthers.

“It's a good test and we have to make sure we don't sit and celebrate the Washington win and forget how tough Nashville is,'' coach Pete DeBoer said.

Mike Santorelli came back to Nashville's Bridgestone Arena on Friday morning and liked the improvements the facility was forced to undertake after last year's flooding. The Predators also see an improved Santorelli. Last year, Santorelli languished on Nashville's fourth line. He comes into Saturday's game as Florida's leading goal scorer as his power play goal Thursday was his eighth of the year.

“Things are definitely going good,'' said Santorelli, who spent three seasons in the Nashville organization. “We've played well the past few games and we want to keep it going. It's exciting to be back, but I have to be ready to play.''

Saturday's game is also a homecoming for assistant general manager Mike Santos, who swung the deal for Santorelli.

“Mike had some inside information on these guys having worked here,'' DeBoer said. “He told me over the summer what he thought [Santorelli] could do. To both their credit, Santorelli has delivered.''

-- The Panthers are going for their fourth straight win Saturday – something they have never done in two-plus seasons under DeBoer.

“I don't have an explanation for it,'' he said. “The key to a good season is stringing together multiple wins and climbing above .500 and separating yourself from teams your around. It's been one step forward, one back. We need to keep moving forward.''

-- DeBoer confirmed Friday that winger Chris Higgins' foot infection is indeed a form of Staph, although team athletic trainer Dave Zenobi says he is not worried about an outbreak because if something like that were to happen, it already would have shown up somewhere else.

Higgins apparently had a cut on the top of the foot and it got infected while the team was in Anaheim. Higgins has missed the past four games, but Zenobi says Higgins is responding well to the antibiotics and could be back in the lineup on Wednesday.

SATURDAY: PANTHERS AT PREDATORS
When, Where: 8 p.m.; Bridgestone Arena, Nashville
TV/Radio: FSNF; 560-WQAM
The series: Tied 6-6-3
The game: Tomas Vokoun makes his third start in Nashville since the Predators traded him to Florida in 2007. He's 1-1 against Nashville with 56 saves off 60 shots. .-.-. Since the 2005-06 season, these two have played six times; Nashville has won four of those meetings. The Predators have won four of their past five games, earning nine of the 10 available points in the standings.