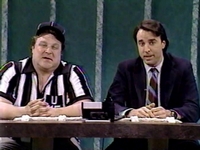 Pete DeBoer wasn't happy for much of Wednesday's game, not with his team's inability to stay out of the penalty box, the play of his starting goaltender nor officials who didn't review what was the game-tying goal.

The Panthers coach sure wasn't thrilled when the night was concluded, either, as Bryan McCabe's apparent goal was never looked at and Atlanta left BankAtlantic Center with a 3-2 win.

Most close calls in net are reviewed via satellite at Hockey Central in Toronto. McCabe's shot lodged inside the cage beyond the line before Ondrej Pavelec pulled it free. Were reviewers in Toronto distracted by the Canada-Russia game taking place at the world juniors?

“It looks like a goal to me and I'm baffled why the referees can make certain to make sure everyone goes to the box but why no one took a second look at it,'' DeBoer said. “They look at everything else. I got no explanation why. They said if it was close, Toronto would have buzzed them. They never got that.''

Florida, which won two straight to climb to a game over .500 for the first time this season, never led on Wednesday and fought the refs as well as a general malaise for most of the second period. Florida was called for six penalties and had to kill off a lengthy 5-on-3 chance as well as a questionable five-minute major called on Shawn Matthias for boarding early in the third period.

The Panthers survived Matthias' stint in the box, but weren't strong enough to hold off Atlanta late in the first during its two-man advantage. With Dmitry Kulikov and Jason Garrison both hanging in the penalty box not only was Florida down two defensemen, but two of their better penalty killers as well. With the score tied at 1, the Thrashers went into the first break with a 2-1 lead as Rich Peverley jammed a puck past Tomas Vokoun with 31 seconds left in the period.

Vokoun wouldn't last much longer. Less than seven minutes into the second, Peverley got loose with the puck and charged Vokoun, firing a shot from the left circle, beating him over the shoulder to make it 3-1. DeBoer had seen enough, yanking his starter for backup Scott Clemmensen.

In his career, Vokoun has been a little off after shutouts. Vokoun, who blanked the Rangers on Sunday, has given up three or more goals in 26 of his games following a shutout – including in 12 as a member of the Panthers. Wednesday marked the fifth time Vokoun didn't finish a game following a shutout.

The Panthers didn't do much on offense during the second, getting off just five shots against Ondrej Pavelec.

Florida trailed 1-0 after Niclas Bergfors scored in the first, quickly tied things up when Stephen Weiss got his team-leading 13th goal of the season by whipping a shot past Pavelec from the slot. Weiss now has eight goals and six assists in his past 13 games.

The Panthers wouldn't get another goal until Chris Higgins charged Pavelec and beat him over the shoulder for the 100th goal of his career. Higgins, who struggled to put the puck in the back of the net for much of the past few seasons, has been hot of late, scoring in each of his past three games with five goals in his past six games.

Not long after Higgins scored, McCabe fired a shot from 45 feet out. Play stopped momentarily before the puck was dropped and the game continued. Florida never got close to scoring again.

Chris Higgins had a scary moment during the third period of Monday's game after he was cut above his right eye by the skate of Carolina's Tim Gleason. Higgins jumped right up after being cut and skated to the locker room not knowing how serious the cut was. Higgins said his eye was filled with blood and he could feel the skin “flapping” as he skated.

Higgins took 12 stitches and returned to the game. He says he feels very fortunate he didn't lose the eye during the collision – although he still couldn't believe both he and Gleason were charged with the same penalty on the play. The two players were charged with four minutes for high sticking. “No, I've never seen that before either,'' Higgins laughed. He was told of the penalty while being stitched up.

-- Forward Evgeny Dadonov didn't play Wednesday after injuring an ankle Monday. Dadonov came out for the morning skate in Sunrise but didn't finish. Darcy Hordichuk was back in the lineup for the first time since last week's game against the Bruins.

-- Team USA finished play at the World Juniors in Buffalo on Wednesday with Panthers prospects playing big roles in the 4-2 win over Sweden for the Bronze medal. Drew Shore, a sophomore at the University of Denver, scored to give Team USA a 2-1 lead in the third period. Center Nick Bjugstad, a freshman at Minnesota, scored the game-winner off his own rebound.