NHL Official: We Should have Reviewed Bryan McCabe's Goal ... With Video From FSN/NHL 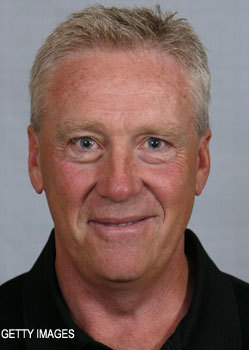 The video of Bryan McCabe's game-tying goal wasn't reviewed in Toronto for a variety of reasons, the NHL's Mike Murphy told The Miami Herald in an email received early Thursday morning.

Murphy explained the process to why the goal wasn't looked at immediately -- but ultimately took the blame.

And, it must be said, thanks to Mike for responding to my email so quickly. That is most appreciated.

"We still should have reviewed the play,'' he ended his email. "That was my error.''

Here's what Mike wrote (his words from e-mail in italics):

"We saw the play but we did not review it.

"The on-ice officials indicated 'no goal,' so we were not alerted to a possible review/possible goal."

Steve Bernier was pointing right at the puck sitting wedged in the goal cage and tried getting the attention of the official. They seemingly wanted nothing to do with him. I asked McCabe if he tried to slow down the officials from dropping the puck -- he said they dropped it "in four seconds.''

Video -- DOWN BELOW -- shows McCabe arguing with the officials after they didn't call a goal on the shot.

"The video goal judge did not indicate any issue because the overhead camera
did not show the puck in the net.

"We did not see the puck in the net until the very end of the stoppage of play. It was then that we wondered how it had got into the net. Was it put into the net after the whistle? We did not know.''

Again, had they been alerted to this, perhaps Fox Sports South/Florida could have found the right replay and sent it up. Apparently, FSNF didn't have the definitive view of the puck -- the reverse angle -- until later. That's what was told to me, anyway.

"When we did see the puck in the net on the last replay we immediately contacted the video goal judge but play had already resumed and our window of opportunity to review the play was gone.

"As an aside, this play would have been a very difficult play to award a goal on because we never know when the puck goes in the net relative to the
referee blowing his whistle.

"But we still should have reviewed the play. That was my error.''

-- So, should the Panthers be cheesed off?

This is the third time this season the Panthers have had goal calls go against them -- and it's costing them points.

In the season opener at Edmonton, Florida loses as Shawn Horcoff bags the game-winner after kicking the puck past Tomas Vokoun. It was reviewed: And allowed.

Later on in Toronto, Florida and the Leafs are tied 1-1 when Scott Clemmensen is run over by Colton Orr just as the shot is coming through. Goal, Leafs. The NHL's Colin Campbell later says the goal should not have counted and Florida should have gone on the power play.

-- Here is the video highlight from FSN Florida via NHL.com. Go toward the end of the video to see the disputed play. As Mike Murphy explains, you can see where the confusion is. The later reverse angle truly shows that the puck is embedded in the cage, way over the line.

It's a good hockey goal.

And it's time for me to go to sleep. David J. Neal is covering the team on Thursday but I will have updates if anything crazy happens.