Black Cloud Parts (for now) as Florida Panthers top Reeling Thrashers 2-1 in Shootout ... (OR) Steve Bernier: From Waivers to Winner 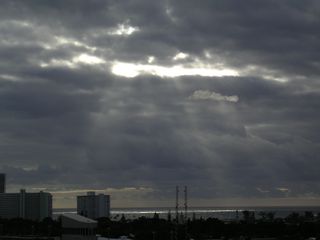 ATLANTA – The Panthers went into Friday's game a touch shorthanded what with Cory Stillman traded to Carolina on Thursday and second-leading scorer Dennis Wideman sitting things out.

Florida then lost Rostislav Olesz and Chris Higgins to injury in the first period, effectively leaving the Panthers with only three healthy forward lines.

The Panthers goalie stopped 45 shots in 65 minutes of work during regulation and knocked back five of six faced in a shootout the Panthers thanks to Steve Bernier's goal on the final shot. Florida's hard-fought 2-1 victory snapped a two-game losing streak and just added to the woes of the struggling Thrashers.

Atlanta, which was entrenched in a playoff spot on Jan. 5, have gone a meager 3-11-5 since beating the Panthers 3-2 in Sunrise that night. The Thrashers got their first point in five games by going to overtime with the Panthers, but still lost ground in the playoff chase.

The Thrashers, however, aren't the Panthers concern. Florida was just happy to get a win and part the black clouds surrounding this team the past week. The Panthers are in the middle of a probable roster sell-off, something not helped by consecutive 5-1 losses to the lowly Islanders and Senators.

“This is the way we have to play,'' said Bryan McCabe, one of many Panthers who could leave by Monday's trade deadline. “We got blown out the past two games and didn't enjoy practice Thursday. We showed up and really battled with the guys out. The goaltending really helped, but we battled hard all night.''

Bernier was allowed to celebrate Friday's win as a hero. Bernier, who has only five goals and 14 points, was placed on waivers on Thursday.

So Bernier cleared at noon on Friday, then scored the game-winning goal in the shootout at 10:20 p.m.

“There are things you control and things you don't,'' Bernier said. “When you get a chance to help the team on the ice, you want to do it. I'm glad to have that opportunity. This may give me confidence in my game. Emotionally, there's been a lot of them. But you have to live with them. It's part of the job.''

The Panthers were forced to play down two forwards when Olesz apparently suffered a serious knee injury just over two minutes into the game. Bernier and Mike Santorelli helped their fallen teammate into the locker room only to see Higgins go down with a hand injury later in the period.

In between the injuries, however, former Atlanta center Marty Reasoner gave the Panthers a 1-0 lead less than 10 minutes into the game.

Vokoun, also the subject of trade talks, was strong. The lone goal he gave up – to Blake Wheeler – is one he would like back. Wheeler, who was 4-0 against Florida this season as a member of the Bruins, hit Vokoun with the puck on a breakaway, the puck softly finding its way past the goalie and through.

In the shootout, Florida got a goal from Santorelli but nothing else until Bernier won it in the sixth round. The Panthers went 2-2-0 on this roadtrip, with both wins coming in a shootout.

“It was a nice win,'' coach Pete DeBoer said. “The guys really responded after we had a heart-to-heart after the Ottawa game.''

DeBoer and assistant general manager Mike Santos both said not to read too much into defenseman Dennis Wideman sitting out Friday's game. The Panthers had an extra defenseman after Friday's trade with Nashville and DeBoer said Wideman was dealing with an injury although he wouldn't be specific. “I don't want to get into it,'' DeBoer said.

Wideman has been logging big minutes of late and is Florida's second leading scorer. He's also minus-26. That number ranks Wideman third from last in the entire league, 843 out of 845 players.

Wideman, acquired from Boston in the Nathan Horton deal last summer, could return next season as he is signed through the 2011-12 season – but his name has been one of many mentioned to be garnering interest from other teams as the Panthers go into Monday's trade deadline looking to deal.

-- Santos said defenseman Keaton Ellerby was sent down to the Panthers AHL affiliate in Rochester, N.Y., because he hasn't played well lately and needs.

Said DeBoer: “He’s a young player right now. It’s critical he gets the right messages and gets brought along at the right pace. When he takes a step back he needs to regroup and come back again. This is a guy that has been handled the right way. His upside is huge. He’s taken huge strides this year.''

DeBoer hinted that Ellerby could return soon, although Santos would like him to stay in Rochester for the time being. If Florida were to deal some defensemen in the coming days, Ellerby may have to be recalled.

-- DeBoer said he was hopeful that injured defenseman Dmitry Kulikov's injured ankle was healing up enough that he would be able to play next week. Forward Jack Skille, who hurt his ankle on Wednesday, could be out a considerable amount of time. His return is not known. Skille will be checked out by doctors in Florida this weekend.