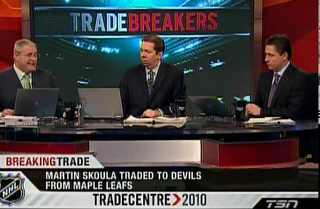 UNIONDALE, N.Y. -- The last time the Panthers visited Canada was at the beginning of the month, the unofficial start of the NHL trade deadline countdown.

The Panthers are back in Canada once again, and with the deadline looming, the team is in the center of all trade conversations.

While that is great for those in the media business – and anyone with a Twitter or Facebook account – it's not a great position for the Panthers themselves. Although Florida's players have already been inundated with questions about their futures, things always heat up when the Canadian media is involved.

If the Panthers wanted to shy away from trade talk, they went to the wrong place. The Panthers practiced in Kanata, Ont., on Tuesday in preparation for Wednesday's game against the host Ottawa Senators. The trade deadline is Monday at 3 p.m.

“I thought we had a real good practice,'' coach Pete DeBoer said by telephone Tuesday afternoon. “I  wanted to keep the focus on the on ice, but that's not easy with the trade talk swirling around. I thought our guys were real good, real professional.

“There is more exposure up here, but it's North American wide now. With satellite television, [Canadian all-sports station TSN] is in every dressing room. We all watch it and hear it anyway. There's just no good place to be this week.''

The Panthers, as well as the last-place Senators, are now one of the most talked about teams in hockey. And that's only because it's pretty well known that general manager Dale Tallon and assistant GM Mike Santos are working the phones trying to swing some deals.

Florida has a bevy of pending free agents that they would like to get some return for. The Panthers are a long shot to sneak into the playoffs, and even if they were closer, the Panthers management team has said they are looking years into the future when it comes to the development of the franchise and not up until the playoffs start in the second week of April.

“There are no secrets,'' DeBoer said of his team's mindset. “Every trade deadline is the same. In the position we are in, and what management has said, has heightened things. More guys are on notice that they might not be here at the end of the weekend.''

“You can read the rumors, listen to the talks. They go right by me,'' Dvorak said. “Obviously, it's not a comfortable time but it's part of the business. You have this every year. We have to play this. We have a great bunch of guys and we've played hard just about every night. [Monday] we didn't do our job.'' 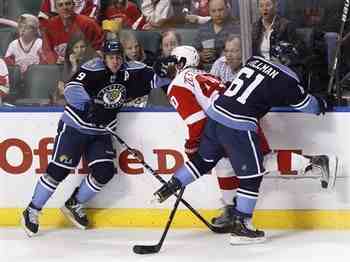 DeBoer doesn't think center Stephen Weiss will be punished by the league any further after being ejected from Monday's game against the Islanders after aggressively going after New York's Radek Martinek.

Weiss received a five minute penalty for elbowing Martinek in the head along with the game misconduct. Weiss isn't known for being a physical presence, but the Martinek incident was Weiss' second big hit in three games. Weiss tussled with Henrik Zetterberg on Friday, knocking off the Detroit center's helmet with a hard forearm as both collided by the boards.

DeBoer likes seeing that side of Weiss, although he didn't like the way Weiss went about Monday's hit.

“He didn't express why he did it, but it's a frustrating time of year,'' DeBoer said. “You pour your hearts into making playoffs and now we're going into deadline and it looks like were going to be trading players. I like the aggressiveness as long as it's not out of frustration with how things are going on the ice. That's the difference.''

-- Dvorak and Dennis Wideman missed Tuesday's practice with injuries. DeBoer didn't know what their status would be for Wednesday. 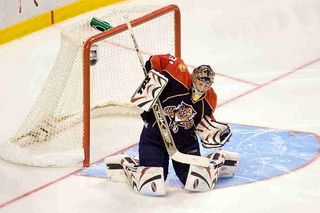 WEDNESDAY: PANTHERS AT SENATORS
When, Where: 7:30 p.m.; Scotiabank Place, Ottawa
TV/Radio: FSN/WQAM 560
The series: Senators lead 36-26-3
The game: Both teams are struggling and should have new-look rosters within a week. The Senators got a brief pick-me-up Saturday as newcomer Craig Anderson (the former Panthers backup traded to Ottawa last week) shutout Toronto in his Sens debut. Since Jan. 1, the Sens have stumbled to a 3-13-4 record. Anderson is expected to start Wednesday, facing Scott Clemmensen – the goalie Florida signed to replace Anderson as Tomas Vokoun's backup in 2009. Clemmensen and Anderson met up last year in Sunrise with Florida winning 6-5 in a shootout. Anderson didn't finish the game, forced to leave after being run over by Florida defenseman Keith Ballard.